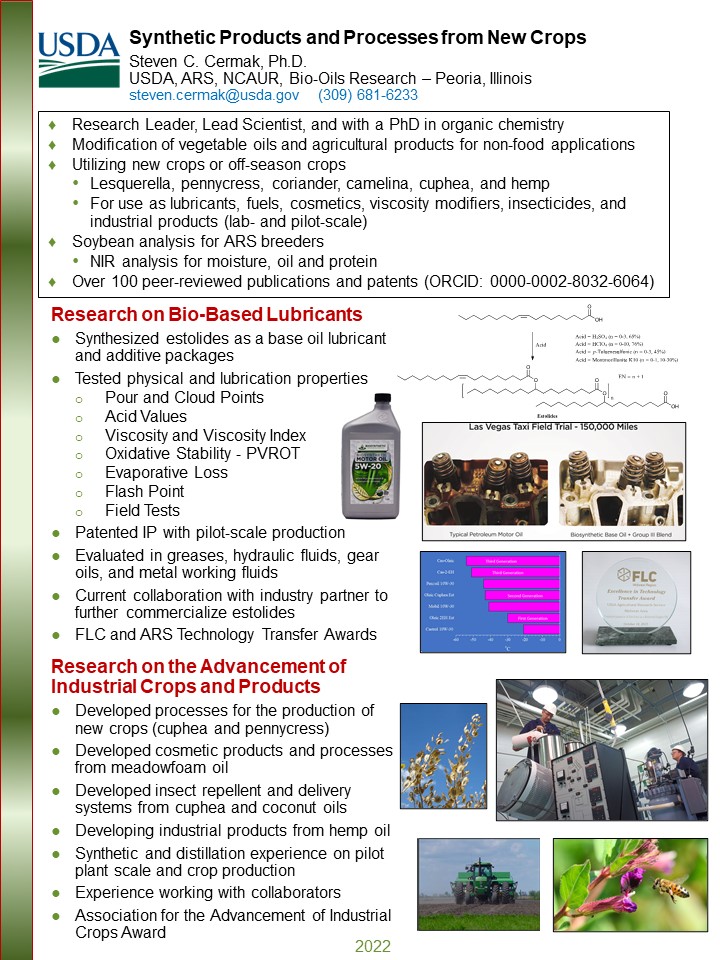 Dr. Cermak was trained as an organic chemist at the University of Iowa and has over 20 years of research experience in the Bio-oils Research (BOR) Unit at NCAUR.  He currently serves as Research Leader for the BOR Unit and Lead Scientist of the new crops CRIS (185).  He has co-authored more than 100 publications and 6 patents.  His research accomplishments are well recognized nationally and internationally as evidenced by numerous invitations to speak at national and international meetings (France, Germany, Italy, Spain, Mexico, Chile, and Canada) and special invitations to industry and specialty groups.

Dr. Cermak was recognized by the American Oil Chemists' Society (AOCS) in 2001 by receiving the New Crop sessions "Outstanding Paper Presentation."  He was awarded the 2006 "Researcher of the Year" Award by an international society (Association for the Advancement of Industrial Crops, AAIC).  In 2011 and 2016, Dr. Cermak was awarded the Technology Transfer Midwest Region Award for Excellence in Technology Transfer by the Federal Laboratory Consortium (FLC).  He served as chair of the 2009 International AAIC Meeting, Chile.  He organized and served as chair for the 2004 Great Lakes Regional American Chemical Society (ACS) Meeting; additionally, served as treasurer (four years) for the award-winning Peoria ACS Section. He also serves on the Editorial Board of the Industrial Crops and Products Journal.

The objective of Dr. Cermak's research is to develop new concepts and new industrial products and processes in utilizing new crops or off-season crops (lesquerella, pennycress, coriander, and hemp) and other oils for the U.S.  Specific areas of study include:

-New crops selections for the U.S.