Estolides may not be a household name yet, but Agricultural Research Service (ARS) scientists and their industry partners are working on it.

Tests showed estolides showed excellent oxidative stability, which is a measure of the service life of a lubricant. Other biobased lubricants that were evaluated for comparison required the use of costly additives to keep them from oxidizing and performing poorly, according to Steve Cermak, Terry Isbell, Thomas Abbott (retired) and others with the ARS center's Bio-oils Research Unit in Peoria.

The estolides also scored high marks on the opposite end of the spectrum, retaining desirable pour point properties when used in cold temperatures of -22 to -52 degrees Celsius. Furthermore, estolides performed as well as or better than standard petroleum-derived base oils.

In addition to coming from a renewable resource—namely, castor or soybeans—estolides promise to leave behind a lighter "environmental footprint" than mineral-oil-based lubes. Testing also showed that the estolides components of a finished engine are biodegradable. 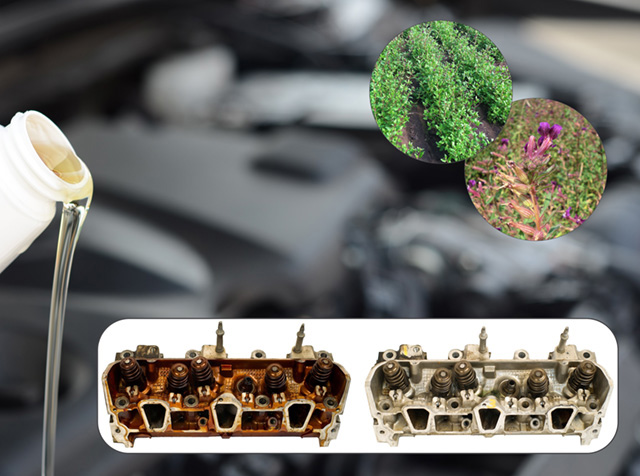 ARS researchers created a process for making biodegradable base oils for lubricants and other products using estolides from canola, soybean and other crop plants.

Some inventions can languish on the lab bench for years before a company takes notice. Not so with estolides. In 2009, ARS licensed the technology to Biosynthetic Technologies, an Indianapolis-based company which has since commercially developed estolides into biosynthetic base-oil products for a variety of applications.

The company created a synthetic motor oil using the estolides technology and put it to the ultimate road test: lubricating the engine of a Las Vegas taxicab during a 150,000-mile, 18-month trial run involving stop-and-go traffic. In this test, the engine using estolides-based motor oils was cleaner and showed much less varnish than those engines using commercially available mineral-oil-based motor oil.

Under a renewed Cooperative Research and Development Agreement (CRADA) signed with ARS in July, Biosynthetic Technologies will continue collaborating with the Peoria team to expand the functionality of estolides. CRADAs are one of several partnership mechanisms by which ARS innovations like the estolides technology are moved out of the lab and into the marketplace, where consumers, producers and other stakeholders can benefit.

The team's estolides research also supports the "Value-Added Innovations" theme outlined in the USDA Science Blueprint and moves us closer to meeting the goals outlined in USDA's Agriculture Innovation Agenda.