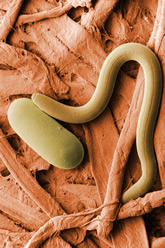 A soybean cyst nematode and its egg, magnified 1000X in a low-temperature scanning electron micrograph. ARS scientists in Beltsville, Md., have made some interesting findings regarding the egg-hatching characteristics of this pest and its environment. (Plate # 10334, courtesy ARS Electron Microscope Unit). Click here for 300-dpi version.

A Cold Approach to Nematode Egg-Hatch

The egg-hatch characteristics of soybean cyst nematodes, especially after exposure to cold, might hold clues that could one day help keep them under control, according to Agricultural Research Service (ARS) scientists in Beltsville, Md.

Soybean cyst nematodes, Heterodera glycines, are microscopic roundworms in the soil that cost U.S. farmers hundreds of millions of dollars in losses each year.

Physiologist Edward Masler and plant pathologist Inga Zasada, in the ARS Nematology Laboratory at Beltsville, have studied the conditions under which this pest's eggs hatch. They've found that the eggs fall into two categories: those that readily hatch in water, and those that will hatch only when exposed to a host plant.

In follow-up research, Masler and Zasada discovered that duration of exposure to cold decreases the number of soybean cyst nematode eggs that will later hatch in water.

In one study, 70 percent of H. glycines eggs readily hatched in 81° F water over 12 days, while others hatched only when exposed to soybean plants. The scientists then stored eggs in water refrigerated to 41° F for varying lengths of time, and found that refrigeration suppressed hatch but didn't kill the eggs.

The results indicate that if nematode embryo development is stopped before reaching a critical developmental stage, it can resume only after the embryo is exposed to additional stimuli—such as from a host plant—and returned to normal temperature.

According to Masler, refrigeration holds potential as a means of producing H. glycines eggs of different developmental stages. These would be useful in studying molecules related to hatching and other regulatory functions that may be exploited for biological control of the pest.