Huanglongbing (HLB), also known as Citrus Greening disease because fruit tends to turn green after ripening, undoubtedly poses the most serious threat that the Florida citrus industry has ever faced. The bacteria that cause HLB—three species of Liberibacter—probably originated in China in the early 1900s. In countries where the disease is endemic, citrus trees begin to decline within 5 to 8 years after planting and rarely bear usable fruit.

First detected in Florida in 2005; by 2008, it had been identified in most of the citrus growing counties in the state. Despite everyone's best efforts, HLB now literally threatens the survival of Florida citrus and is a potential threat to the entire U.S. citrus industry.

ARS scientists are actively engaged in research with university and industry partners on the critical components of this disease such as etiology and epidemiology, the insect vector, and the plant host's response to HLB infection.

In February 2008, members of the citrus industry requested additional input from ARS scientists, especially from researchers outside of the citrus field, to draw on the most diverse expertise possible to elicit new ideas about research needs, gaps, priorities, and opportunities.

In response, ARS convened a workshop in April 2008 at the U.S. Horticultural Research Laboratory in Fort Pierce, Florida, especially inviting ARS scientists who are leaders in their scientific fields but who are not ordinarily engaged in citrus research. These ARS scientists brought their collective expertise in animal and plant entomology, animal and plant pathology, genetics, horticulture, and microbiology to the workshop. The workshop was coordinated with the National Academy of Sciences (NAS), which had been asked by the Florida Department of Citrus to develop a Request for Proposals to manage grant funding for research leading to HLB management.

That meeting was followed in May 2008 by a workshop in Beltsville, Maryland, of key ARS citrus researchers to discuss potential new collaborations and research directions to address the needs identified at the April 2008 workshop.

On September 17-18, 2008, a group of ARS scientists, industry and university representatives from citrus producing states met with the federal regulatory agencies USDA-APHIS, FDA, and EPA to prepare for the advent of transgenic citrus to be used to combat HLB and canker to seek guidance on bringing these products to market.. This meeting was an excellent opportunity for each party to learn about what will be needed as progress is made toward this goal. Other potential new chemicals for insect control and management of the pathogen in citrus were also discussed. A team of scientists are preparing documents that summarize published data on citrus biology, pollination, gene flow and juice composition parameters; information that will be needed by the regulatory agencies as transgenic citrus products are developed.

ARS has initiated a significant research program, even before the 2008 workshops.

ARS scientists have established partnerships with industry and university colleagues, and these collaborations continue to grow and diversity as new knowledge is developed. The ultimate goal is to effectively manage major threats to the citrus industry in the U.S., in particular, citrus greening, or HLB, and canker. A broad approach is being taken to target the main components of the disease triangle; the host, the pathogen and associated organisms, and the insect vector. Insect management, repellants and control are critical to disease control. Manipulating citrus groves by varying nutrition and high density planting may reduce the impact of the diseases. As scientists learn more about the bacterium associated with HLB, methods for directly impacting its growth in the citrus host will be devised. Conventional breeding and genetically modified citrus varieties are being explored. All of these components of disease intervention are being investigated by ARS scientists and colleagues, and will be utilized for to benefit the national citrus industry.

Because of the fastidious nature of HLB bacteria (CandidatusLiberibacter asiaticus), a high-throughput detection technology for HLB is critical for HLB research and disease management. Polyclonal antibodies against HLB pathogen have been developed by researchers at Fort Pierce, Florida, and a series of primers and probes were also developed for better detection of HLB using PCR or in situ hybridization. These technologies have been transferred to university and state regulatory research laboratories for HLB detection and other research purposes.

ARS scientists at Frederick, Maryland, determined the effect of imidacloprid insecticide on transmission of HLB. Following incorporation of the insecticide into sweet orange seedlings, infectious psyllids were aspirated on the seedlings and monitored for survival and disease transmission. Although most psyllids died within the first 24 hours, strong symptoms of HLB infection were evident by 8 weeks in most plants, indicating the insects could transmit the causal HLB bacterium before dying.

ARS scientists at Beltsville, Maryland developed and validated the first real-time and quantitative PCR assay for the greening pathogen. This assay was used by the USDA Animal and Plant Health Inspection Service (APHIS) and the Florida Department of Agriculture to confirm the presence of HLB in Florida. Producers will benefit from early detection and genetic improvement for resistance will be accelerated.

ARS scientists at Ft. Pierce and colleagues recently published the full genomic sequence of HLB bacterium, 'Candidatus Liberibacter asiaticus'. This is a major scientific advance, and will enable scientists to identify genes responsible for the disease, enhance capabilities to culture this organism and determine its true role as the causal agent.

Scientists at Ft. Pierce have evidence that suggests that guava, interplanted with citrus, prevents the spread of greening. Scientists in Japan and Viet Nam discovered that HLB did not occur in citrus groves when intercropped with guava, while control plots had over 30 percent infection. The mechanism may be volatile compounds produced by guava which disrupt the ability of the psyllid vector of HLB to locate its citrus host. Studies are underway in field plots to validate these preliminary findings and to identify the potential volatiles.

Publication Abstract: Differences in Secondary Metabolites in Leaves from Trees Affected With the Greening (Hlb) Disease

Citrus Huanglongbing: The Pathogen and Its Impact
Plant Health Progress

Effects Of a Particle Film on Biology and Behavior of Diaphorina Citri (Hemiptera: Psyllidae) and its Infestations in Citrus
Journal of Economic Entomology

SaveOurCitrus.org
Save Our Citrus campaign (APHIS).

Incidence of Huanglongbing in Psyllids Under Natural Conditions in Florida
Phytopathology 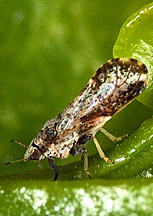 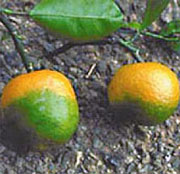