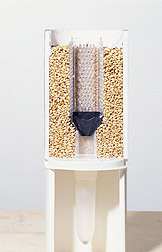 Cross section of the Insector probe showing the holes into which insects crawl and then fall into the receptacle. Click image for caption and other photo information.

The world's first automated insect monitoring system has been enhanced and incorporated into a product hitting the market recently in limited release and scheduled for wide-scale availability by Sept. 1.

The Electronic Grain Probe Insect Counter (EGPIC) was patented in 1997 by the Agricultural Research Service, the U.S. Department of Agriculture's chief scientific research agency. It was a major improvement over grain probe traps used to detect insect infestations in grain bins. That's because it used infrared beam sensors to quickly and accurately record the number of insects, and the time of day, as they dropped through the probe trap.

EGPIC was designed to provide rapid and safe feedback on insect activity in the bin as it is actually happening. With this tool, managers could determine insect population densities in stored products without going into grain bins.

Dennis Shuman, a research electrical engineer at the ARS Postharvest and Bioregulation Research Unit at the Center for Medical, Agricultural, and Veterinary Entomology in Gainesville, Fla., invented EGPIC with ARS colleagues.

EGPIC was jointly refined--to include species identification capabilities--with a Canadian company called OPIsystems, Inc. ARS filed a second patent and licensed the technology to OPI. The enhanced EGPIC system was integrated into the company's existing stored-product management system and renamed the StorMax Insector by OPI. The easy-to-use system allows companies to use insecticides and nontoxic alternatives only when needed, based on monitoring, rather than routinely scheduling preventive fumigations.

With the revised system, a StorMax Insector is vertically inserted into a storage bin. Insects climb into the probe via one of many slanted, ramp-like openings designed to keep grains from inadvertently entering and causing insect count errors.

The amount of light blocked by an insect falling through two infrared beams determines how large a signal is generated, which is interpreted by the system to identify the insect species. Knowing the species helps managers use incoming insect counts, combined with knowledge of the species' behavior and damage potential, to make control decisions, according to Shuman.

Read more about this research in the July issue of Agricultural Research magazine.