PLoS ONE: Absence of 2009 Pandemic H1N1 Influenza A Virus in Fresh Pork

Soon after the emergence of the H1N1 virus in April 2009, ARS scientists at the National Animal Disease Center in Ames, Iowa, began research using virus samples provided by the Centers for Disease Control and Prevention (CDC). Shortly after the reports of the new H1N1 virus in North America, H1N1 virus outbreaks were reported on turkey breeder farms in Virginia and California in the United States as well as in Chile, Canada, and France. ARS scientists at the Southeast Poultry Research Laboratory (SEPRL) quickly evaluated the pathogenesis of the new H1N1 virus in bird species to determine the potential risk to the poultry industry. The first step was to evaluate whether current U.S H1N1 swine influenza vaccines can protect pigs from infection with the 2009 H1N1 influenza virus circulating in people. This research study also evaluated whether pre-existing titers in pigs previously infected with endemic H1N1 swine influenza viruses circulating in the U.S could protect against the 2009 H1N1 influenza virus. Second was to address whether meat, blood and tissue from pigs infected with the new 2009 H1N1 Influenza A Virus would be free of infectious virus.

Experts believe pigs can act as a "mixing vessel" for the reassortment of avian, swine and human influenza viruses, and might play an important role in the emergence of novel influenza viruses that could be capable of causing a human pandemic similar to the virus in the current outbreak.

The genetic makeup of swine influenza viruses is identical to other influenza A viruses and consists of 8 segments of RNA that code for different proteins. Influenza viruses have the ability to exchange these segments, creating new genetically different viruses. Two major surface glycoproteins (proteins with a carbohydrate attached), called hemagglutinin (H) and neuraminidase (N), are how influenza A viruses are identified. These glycoproteins also determine the host range, antigenicity and the pathogenicity of the viruses. The hemagglutinin and neuraminidase proteins are important targets for diagnostics and used to designate the subtype of the virus.

Currently 16 different hemagglutinins and 9 neuraminidases have been identified. The majority of these viral subtypes are found in waterfowl, with only a few combinations being found in humans and swine.

Swine influenza virus (SIV) is one of the primary causes of respiratory disease in growing pigs and can lead to major economic losses. Currently, only H1N1, H1N2, and pN2 subtypes are circulating in the U.S. swine population.

Pigs have long been considered a potential source for new and novel influenza viruses that infect humans, as they have receptors on their cells that bind both mammalian and avian influenza viruses, increasing the opportunity for the exchange of genetic segments of the virus.

Previously, the CDC have reported approximately one case of human infection with a swine influenza virus every one to two years.

Exposure of sero-positive gilts to swine influenza virus may cause a few stillbirths per litter. Wesley RD (2004) Canadian Journal of Veterinary Research 68:215-217

Characterization of an influenza A virus isolated from pigs during an outbreak of respiratory disease in swine and people during a county fair in the United States. Vincent AL, Swenson SL, Lager KM, Gauger PC, Loiacono C, Zhang Y (2009) Veterinary Microbiology 137:51-59

pN2 and Related Research in Pigs 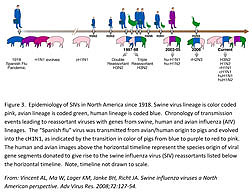 Epidemiology of SIVs in North America. Chronology of transmission. Click the image for larger version. 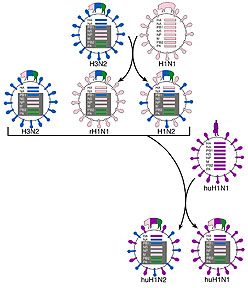 Diagram of viruses with their 8 gene segment constellations in currently circulating SIVs. Click the image for larger version. 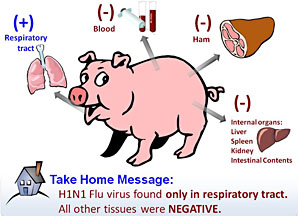