The website follows 37 check dams from 2008 to 2019 that scientists at the ARS Southwest Watershed Research Center in Tucson, Arizona, built in two small watersheds at the base of the Santa Rita Mountains.

“That check dams are helpful has always sort of been assumed, but the benefits have never been solidly documented,” explained ARS research hydraulic engineer Mary Nichols, who built many of the dams and organized the 400 photos on the website. Dam construction was done with the help of students from the University of Arizona,

Check dams are low, porous barricades, in this case made of loose rocks stacked across modest channels, to slow the velocity of runoff that normally would erode channels during occasional rain bursts during the summer monsoon season. By slowing the water as it runs off, instead of eroding channels, the sediment in the runoff can settle out rather than being carried away.

The annual photo series of these 37 locations, show that, correctly placed and maintained, check dams frequently can help refill the eroding channels that have been cut as much as a meter deep by sporadic flash rainstorms.

“In relatively small channels that are not on too steep a slope, we saw gullies that had been getting worse every year almost completely disappear as sediment built up behind a check dam in as few as 3 to 4 years,” said Nichols. 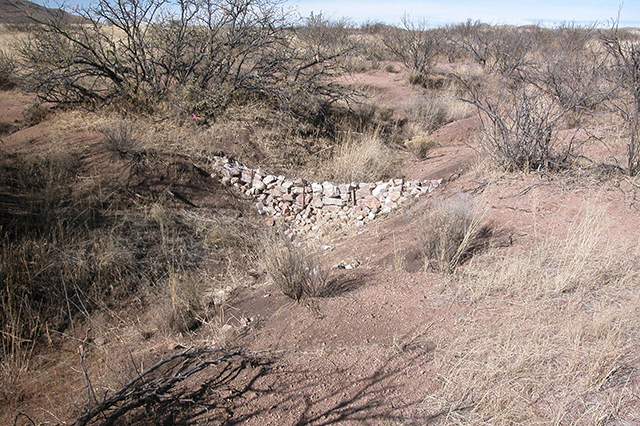 Check dams like this one near Tombstone, AZ, can stop and even heal erosion damage in small run off channels caused by rain bursts. See a short video. For more video clips.

In addition to settling sediment, slowing the water velocity lets more water seep into the ground, building moisture levels. Commonly, grasses and other plants follow, rooting and stabilizing the soil behind a check dam, as they take advantage of the increased moisture level. A feedback loop is created that encourages the capture of more sediment.

“Increasing drought cycles like the Southwest has been experiencing are hard on grasses, and monsoon rain events have become more severe in the last decade, making the damage in the landscape even worse,” Nichols said.  “Check dams are a low-tech, effective tool that can repair or at least limit some erosion damage and help build resiliency into landscapes.”

One of the keys to making check dams work well is maintaining them, according to Nichols.

Check dams are made to come apart and fail gracefully in a really big rain storm so they don’t back up enough water to create a lake and flood effect—that is why they are made of loosely stacked stones rather than the rocks being mortared or cemented together.

Stacked rocks also are less work and less expensive to rebuild, Nichols added, although she found in some cases she needed to create wire cages similar to a taco filled with stones so they would stand up to the customary water force and to make maintenance  somewhat easier.

Check dams are actually an ancient technology that has been used around the world back into prehistory in places as diverse as the Middle East, Asia, and Africa, as well as in North America. Such dams have had a variety of purposes from conserving water supplies to facilitating farming to controlling floods.