Pond scum generally isn't looked upon kindly. But the microalgae that make up these floating green mats of slime could get newfound respect as renewable sources of fuel, specialty chemicals, dietary supplements and other valued products.

The potential of pond scum has also spilled over into agriculture. In August, a team of University of Minnesota (UMN) and Agricultural Research Service (ARS) scientists published findings that inoculating crop soils with microalgae known as cyanobacteria can offer several benefits. These include naturally fertilizing the soil, replenishing its store of organic matter and binding soil particles together so that they're less prone to erosion.

Adriana Alvarez, with UMN's Department of Bioproducts and Biosystems Engineering, led the study together with UMN professor Robert Gardner (deceased) and ARS soil scientists Sharon Weyers and Jane Johnson—both at the agency's Soil Management Research Unit in Morris, Minnesota. The collaboration is part of a shared interest: finding sustainable ways agriculture can meet the food, fiber, feed and fuel needs of a growing world population forecasted to exceed 9 billion by 2050.

For the study, the team chose to use a nitrogen-fixing cyanobacterium known as Anabaena cylindrica UTEX strain 1611. The researchers applied it as a dark green slurry to pots containing Mollisol, a type of organically rich clay loam soil common to grassland areas of the U.S. Upper Midwest. 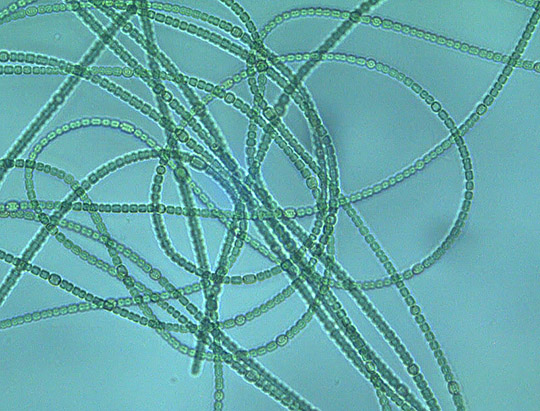 ARS and university researchers are evaluating the use of microalgae called Anabaena cylindrica to naturally maintain soil health and fertility among other benefits. Photo courtesy of Adriana Alvarez, UMN.

Previous research by other groups had focused on the use of cyanobacteria and other photosynthetic microalgae to fertilize rice crops and revitalize degraded soils in arid and semi-arid regions of the world. But less research had been done examining the effects of the microalgae's use on nutrient-rich arable soils with high organic content like Mollisol, the team noted in a paper published in August in the online issue of the Journal of Applied Phycology.

To learn more, the researchers divided their study into three separate laboratory experiments. The first examined the effects of using the cyanobacteria on soil structure and nutrient dynamics, the second on soil loss and nutrient levels in runoff and leaching water following simulated rainfall events, and the third on mineralization, in which "biomass" of the cyanobacteria release plant-nourishing forms of nitrogen and phosphorus as they die and decay in soil.

Among the results, the researchers observed:

Although the results affirm the findings of prior studies, the researchers cautioned more work has yet to be done across different agricultural systems and geographic areas to fully understand the value, safety and limitations of using microalgae.

"More research is needed with different strains, different crops, different soils and climates," Alvarez said. The economic feasibility of scaling up microalgae production and harvest for products that farmers can use—and in what forms—also has to be investigated. However, new approaches like this will be critical to meeting the agricultural challenges of tomorrow, Alvarez added—namely, "protecting and preserving the soil resource and value of soil as a central piece in our food, water and energy production for the next decades."