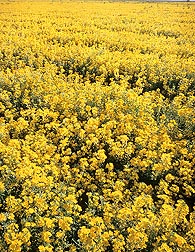 Lesquerella (a.k.a. Fendler's bladderpod and Yellow Top) is a member of the mustard family that's native to the U.S. Southwest. But Agricultural Research Service (ARS) scientists are now eyeing it as a home-grown source of butanol.

Butanol is a cleaner-burning alternative to gasoline that was produced worldwide until after World War II, when making this fuel from petroleum sources proved more efficient than fermenting it from corn and molasses.

Now, using the latest advances in fermentation and product-recovery technology, a team at ARS' National Center for Agricultural Utilization Research in Peoria, Illinois, hopes to rekindle the production of butanol as a biobased fuel, among other groups.

Towards that end, they've conducted research to expand the list of butanol feedstocks that can be used—from fiber-rich crop residues like wheat straw, sweet sorghum bagasse and corn stover, to food wastes and processing byproducts like dried distillers grains and solubles and "presscake" (the crushed remains of lesquerella seed whose oil has been extracted).

The team's efforts are part of a broader umbrella effort at the ARS center to create new, value-added markets for agricultural commodities, especially if they can serve as sustainable alternatives to petroleum-based fuels.

According to ARS chemical engineer Nasib Qureshi, the Peoria center also has a long history of investigating native or naturalized plants with potential development as new oilseed crops—pennycress, cuphea and meadowfoam among them.

Lesquerella first caught ARS researchers' attention years ago for the high hydroxy fatty acid content of its oil, which is critical to making high-quality lubricants, paints and other products.

However, the resulting presscake can't be fed to livestock because of its nutrient-blocking properties, and landfilling poses a waste disposal problem. This also presents a hurdle to commercialization. Fortunately, Qureshi's team saw an untapped resource in the presscake, namely, a bevy of carbohydrates can be used to make butanol.

Together with ARS colleagues Rogers Harry-O'Kuru, Siqing Liu and Badal Saha, Qureshi used a multi-step process for pretreating the presscake and rendering it into a sugar-enriched broth that Clostridium beijerinckii bacteria can then ferment into not only butanol, but also acetone and ethanol (though, in lesser amounts).

In laboratory trials, the approach produced 11-14 grams of butanol per liter of presscake. The total chemical production (combined butanol, acetone and ethanol) was 19 to 29 grams per liter—a nearly 67 percent increase over using corn and glucose sources to produce these three same chemicals, noted Qureshi, whose team plans on scaling-up their experiments using two-liter bioreactors and, if successful, even larger ones.

Keeping feedstock costs down is key to making butanol competitive with gasoline, he added. At $25 a ton or less, lesquerella presscake would command a selling price of $2.27 or less a gallon, he estimated—about a dollar less than from sweet sorghum, another promising feedstock source.

Lesquerella's potential to help "fuel" butanol's comeback would also hinge on research to breed and cultivate the plant as a dedicated bioenergy crop.

Qureshi said that prospect isn't so far-fetched considering the soybean's rise from an obscure livestock forage in the late 1800s to the versatile U.S. cash crop it has become today—second only to corn.

This research also supports the Renewable Energy theme outlined in the USDA Science Blueprint and moves us closer to meeting the goals outlined in USDA's Agriculture Innovation Agenda.