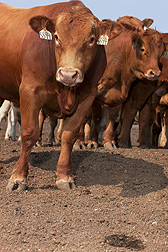 WASHINGTON, DC, March 11, 2019—A fuller picture is emerging of the environmental footprint of beef in the United States.

An Agricultural Research Service (ARS)-led team has completed a comprehensive life-cycle analysis quantifying the resource use and various environmental emissions of beef cattle production in the United States. The aim is to establish baseline measures that the U.S. beef industry can use to explore ways of reducing its environmental footprint and improve sustainability.

"The environmental footprint of producing beef has long been debated. One challenge is that the impacts extend beyond just those associated with growing the animals and include the impact of producing feed and other inputs. This is further complicated by the diversity of ways that beef cattle are managed and fed," commented Marlen Eve, ARS deputy administrator for natural resources and sustainable agricultural systems. "It is important to have an accurate quantification of these impacts to provide a baseline against which production system sustainability can be assessed and improved."

Led by ARS agricultural engineer Alan Rotz, the team's analysis encompassed an array of different types of cattle operations, reflecting a beef supply chain that's among the most complex food production systems in the world. Indeed, the scope of the analysis spanned five years, seven cattle-producing regions and used data from 2,270 survey responses and site visits nationwide. This ensured the results weren't limited to a single region, where climate, soil, production practices and other factors can differ from other parts of the country, added Rotz, with ARS' Pasture Systems and Watershed Management Research Unit in University Park, Pennsylvania.

His collaborators are former ARS research associate Senorpe Asem-Hiablie, Greg Thoma of the University of Arkansas-Fayetteville and Sara Place, with National Cattlemen's Beef Association, which is partially funding the study. The team began its beef life-cycle analysis in 2013 and published the first of two sets of results in the January 2019 issue of the journal Agricultural Systems.

Among the results to emerge thus far:

"We found that the greenhouse gas emissions in our analysis were not all that different from what other credible studies had shown and were not a significant contributor to long-term global warming," Rotz said.

Two areas for potential improvement are water use and reactive nitrogen losses. Water use is increased in the West where U.S. beef cattle are concentrated. Reactive nitrogen losses (at 1.4 teragrams or 15 percent of the U.S. total) mainly in the form of ammonia can lead to smog, acid rain and algal blooms, for example, and potentially pose a public health concern.

The purpose of the analysis wasn't to identify the top-performing regions or most efficient types of operations, said Rotz, but rather to systematically measure the use of fuel, feed, forage, electricity, water, fertilizer and other inputs to raise beef cattle throughout the country—from birth to slaughter.

Using a computer program called the "Integrated Farm System Model" (IFSM), his team also estimated net releases of reactive forms of nitrogen such as ammonia from manure and urine, as well as the three major greenhouse gases (methane, carbon dioxide and nitrous oxide). The gases are so-named for their tendency to trap heat in the atmosphere and contribute to warming of the earth's surface, extreme weather patterns and other global climate change events.

In the next six months, the team will combine the results of its IFSM analysis with postharvest data from other sectors of the beef supply chain—namely, processing, packing, distribution, retail, consumption and waste handling. That phase will be accomplished using the open-source life-cycle assessment program "OpenLCA."

Together, these data will be used to generate a national assessment of the beef industry's resource use, economics, net losses of GHG and other emissions, providing a critical tool for sustainably producing beef as an important source of lean protein and nutrients.