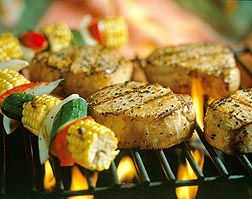 In a survey of more than a thousand pork kidney samples, none were found to have veterinary drugs at levels that even approached close to U. S. regulatory limits.

FARGO, NORTH DAKOTA, March 21, 2019—In a basic survey of more than a thousand pork kidney samples, almost no veterinary drug residues were found and none at levels that even approached U. S. regulatory limits, according to a study just published by an Agricultural Research Service (ARS) scientist in Food Additives & Contaminants: Part A.

These findings signal that U.S. pork producers are using veterinary compounds properly, and indicate that veterinary drug residues in pork are not posing a health concern to U.S. consumers, according to ARS research chemist Weilin Shelver. Shelver is with the ARS Animal Metabolism-Agricultural Chemicals Research Unit in Fargo, North Dakota.

A total of 1040 pork kidneys were purchased from four grocery stores in the Midwest and tested for residues of 5 commonly used veterinary drugs and feed additives: flunixin, penicillin G, ractopamine, sulfamethazine and tetracycline. Pork kidneys are commonly used as an indicator meat as they are readily accessible and tend to concentrate drug residues compared to more commonly consumed muscle meats.

Only 6 samples from the 1040 tested—0.58 percent—were positive when screened for antibiotics, indicating these samples potentially contained antibiotic residues.

As a further check, a 278-sample subset of the pork kidney samples was screened with a more specific type of test for residues of four veterinary drugs: flunixin, a non-steroidal anti-inflammatory agent; ractopamine, an agent that enhances leanness in meat; and the antibiotics sulfamethazine and tetracycline. This testing used Enzyme-Linked Immunosorbent Assays (ELISAs), which at times are capable of measuring residues at far lower concentrations than those called for by regulatory tolerances.

Regardless of the testing method, residue levels of all veterinary compounds were always well below U.S. regulatory tolerances. For example, of the samples assessed by the highly sensitive ELISA and other methods, only 4 percent were positive for minute amounts of sulfamethazine, 10 percent for trace quantities of tetracycline, and 22 percent positive for detectable quantities of the commonly used feed additive ractopamine.