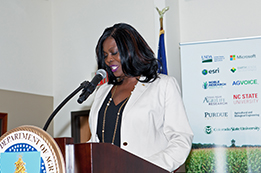 Partnerships for Data Innovation: Realizing the Benefits of Data and the Power of Technology

Recalling unprecedented successes of more than 50 years ago, the administrator of USDA's largest agricultural research agency called on partners in science and technology to revolutionize the way food is grown to help feed the world's burgeoning population.

"The challenges we face in agriculture are complex, they are complicated, and they require comprehensive approaches," said Dr. Chavonda Jacobs-Young, Administrator of USDA's Agricultural Research Service (ARS). "The worldwide population is expected to reach 9 billion by 2050, and all those people will need to eat. That gives only about 30 growing seasons to figure out how to feed 2 billion more people."

More than a half-century ago, Norman Borlaug, an Iowa farm boy armed with degrees in plant pathology and genetics from the University of Minnesota, studied wheat in Mexico. By 1963, his plant-breeding techniques led to a sixfold increase in crop yield and turned Mexico into a wheat exporter for the first time. Later, he took his methods to Pakistan and India, where he was credited with starting a "Green Revolution" that saw Pakistan increase its wheat yield from 4.6 million tons in 1965 to 8.4 million tons in 1970. India increased its harvest from 12.3 million tons to 20 million tons in the same period. Borlaug's Green Revolution then expanded to rice and corn, covering the world's three most important cereal grains. Borlaug is credited with saving more than a billion people from starvation and malnutrition.

Looking for revolutionary advances in agriculture today, Dr. Jacobs-Young met Oct. 7 with leaders in science and technology at USDA's National Agricultural Library in Beltsville, Maryland, for the launch of "Partnerships for Data Innovation" (PDI). PDI members are developing and implementing a series of sensors and other data-collection, management, integration, and sharing systems that will help farmers get the most from their limited resources.

"If you had told me 10 years ago that we would be working with Microsoft and Esri to use the tiny cell phone that we all carry to report and analyze production data from a single crop field and store that information in the cloud, I would have been intrigued, but I would also have been a little skeptical," Dr. Jacobs-Young said. "Technology has advanced so fast that what seemed far-fetched 10 years ago is now part of our daily routine."

Some of the PDI sensors have been working since July in research fields at USDA's Beltsville Agricultural Research Center, a few miles outside of Washington, DC. These sensors—along with drones, satellites, high-tech tractors, and other state-of-the-art technologies—will harvest real-time data from the field and present it to producers. Because many farms do not have internet access, data will be transmitted to the cloud via TV white space, the unused broadcasting frequencies between television channels.

"PDI allows us to work with our partners to find ways to help producers have access to decision tools; to reduce their vulnerability; to increase their resilience; to manage the pests that plague their crops; to respond to the challenges of a changing climate; and to protect our soil, water, and air. This is the very essence of the ARS mission. We are here to feed the world," Dr. Jacobs-Young said.

"Feed the world: How the USDA is using data and AI to address a critical need." (You will be taken to a page outside of USDA ARS.)