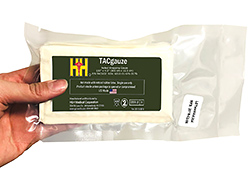 TACgauze is a new nonwoven cotton gauze from ARS and collaborators that helps staunch bleeding and promote wound healing. Photo courtesy of H&H.

A new, nonwoven cotton gauze that quickly stanches bleeding and promotes wound healing is now commercially available, thanks to the efforts of a multidisciplinary team that includes scientists with USDA's Agricultural Research Service (ARS) in New Orleans, Louisiana.

H&H Medical Corporation, a Williamsburg, Virginia, firm specializing in trauma care products, rolled out the new gauze Nov. 21 under the tradename "TACgauze." The product differs from standard gauzes in that it's made of greige (pronounce “gray”) cotton fiber—that which hasn't been scoured and bleached prior to fabrication, notes Vince Edwards, a textile chemist with ARS' Southern Regional Research Center in New Orleans.

In studies there, Edwards identified the role of the cotton fiber's outer cuticle in stimulating the body's production of fibrin and other blood-clotting agents. To do this, he adapted the use of a micro-scale technique (thromboelastography) employed in hospitals to assess patient clotting profiles. Virginia Commonwealth University (VCU) collaborators assessed the clotting properties of fabric made from the fibers using animal models. The findings showed that when made into a gauze used to wrap or pack wounds, greige fiber performed as well as standard cotton gauze dressings.

According to BleedingControl.org, uncontrolled bleeding (hemorrhaging) is the number one cause of preventable death in persons who experience traumatic injury. This can happen within five minutes if hemorrhaging from the wound site isn't slowed or stopped, a state known as “hemostasis.”

In developing TACgauze together with the ARS-VCU team and T.J. Beall Company of Greenwood, Mississippi, H&H sought a hemostatic gauze that was easy to carry and use, affordable, reliable, sterile, long-lasting and effective under wide-ranging and circumstances—whether that be on the battlefield, accident scenes, mass-casualty events or remote locations.

Interest in evaluating TACgauze has come from both the military and civilian sectors, including the U.S. Marine Corps, according to H&H President Paul Harder.