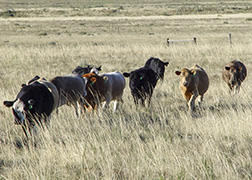 The nutritional quality of forage grasses in the Northern Plains is being altered by rising carbon dioxide (CO2) levels in the atmosphere. Photo courtesy of David Augustine.

An ARS Focus on the Northern Plains: Finding New Ways to Beef Up Our Cattle

Carbon dioxide (CO2) levels in the atmosphere continue to increase and while that stimulates plant growth, it also means plants have less nitrogen, which is a key nutrient.

Agricultural Research Service (ARS) ecologist David J. Augustine in Fort Collins, Colorado wanted to know if that means the forage grasses that cattle eat are becoming less nutritious and harder to digest, and if it affects the animal's ability to gain weight as it grazes. Yearling cattle in rangeland systems in the Northern Plains typically are grazed on forage grasses from May to October before they go to finishing lots where they are fed grain-based diets.

Augustine and his colleagues simulated the 600 ppm CO2 levels on a mixed-grass prairie in the Northern Plains that produces the native grasses that make up the forage used by cattle.

The researchers collected data for seven years and found that the amounts of forage increased, but the decline in nutritional quality was consistent across the years and that by the end of the grazing season, individual cattle would weigh about 30 pounds, or 12 percent, less. Trying to induce cattle to eat more of the available grass isn't a viable alternative because of its reduced nutritional content, the researchers say.

The study was published last year and since then,  Augustine and his colleagues at the Rangeland Resources and Systems Research Unit in Cheyenne, Wyoming and in Fort Collins, have been searching for new ways to help ranchers address the problem.

They say that ranchers may want to consider shortening the traditional grazing season because by late summer forage grasses are less nutritious and the cattle gain only negligible weight from early September to mid-October. Net returns also are consistently higher for cattle removed from grazing and sold in early September, according to another ARS study.

The researchers remain optimistic. "There is certainly an important issue to be addressed regarding forage quality, but there also are a number of potential solutions," Augustine said.