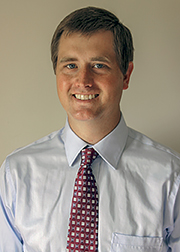 The World Food Prize Foundation announced today that Matthew Rouse, a U.S. Department of Agriculture (USDA) scientist, is the winner of the 2018 Norman Borlaug Award for Field Research and Application, endowed by the Rockefeller Foundation, at the Sustainable Development Goals Conference in the Netherlands.

The award recognizes exceptional, science-based achievements of individuals under the age of 40, who have advanced human development by improving the quality, quantity or availability of food in the world. Award recipients emulate the same intellectual courage, stamina and determination in the fight to eliminate global hunger and poverty as demonstrated by Norman Borlaug, who received the 1970 Nobel Peace Prize.

Rouse, a USDA-Agricultural Research Service (ARS) plant pathologist, is being honored for his research in global wheat improvement and protection against wheat diseases, which includes developing stem rust-resistant wheat. He has played a significant role in global efforts to contain and reduce the impact of Ug99, a devastating wheat disease that threatens the world’s wheat crops.

As coordinator of the ARS spring wheat nursery project in Kenya and Ethiopia, Rouse identified U.S. wheat breeding lines with resistance to Ug99. Some of these resistant lines have been released and include a successful University of Minnesota variety, “Linkert.” He has worked with international research teams to rapidly respond to new rust pathogen outbreaks and to identify new stem rust-resistant lines, including “Kingbird,” an Ethiopian variety and “NARC 2011,” a Pakistan variety.

Rouse, who works at the ARS Cereal Disease Laboratory in St. Paul, Minnesota, also has served as one of the key implementing scientists during the past 10 years of global wheat improvement and disease protection collaborative projects, supported by the Bill & Melinda Gates Foundation and the United Kingdom Department for International Development.

Rouse is the seventh scientist to receive this prestigious award. Recipients are selected based on their attributes and accomplishments that reflect those demonstrated by Borlaug, who developed high-yielding, disease-resistant wheat in Mexico in the 1940s and 1950s and subsequently introduced adaptable wheat varieties into India and Pakistan during the 1960s, as both countries faced imminent widespread famine.