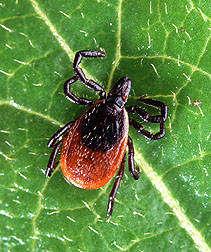 The black-legged tick can spread Lyme disease to people.

ELLICOTT CITY, MARYLAND, April 24, 2018—A surprisingly high percent of the white-footed mice collected last summer in Howard County, Maryland, in an Agricultural Research Service (ARS) Areawide Integrated Tick Management Project turned out to be infected with the bacteria that cause Lyme disease.

The area-wide project in Maryland is mainly a partnership with Howard County Department of Recreation & Parks (HCRP) and University of Maryland. Other collaborators on the project include Pennsylvania State University, Centers for Disease Control and Prevention (CDC), U.S. Army Public Health Center and University of Massachusetts.

The high rate of white-footed mice infected with Borrelia burgdorferi, the bacteria that cause Lyme disease, in Howard County—just over 50 percent of captured mice—was a little surprising to ARS project leader Andrew Li.

What was more surprising, according to Li, was that collaborators doing analogous sampling of mice in New Haven County, Connecticut, found an unusually low rate of infection of about 35 percent in 2017. More commonly, white-footed mice in Connecticut have infection rates as high as 80 percent

Lyme disease was first recognized as an illness in 1975 in Lyme, Connecticut, in New London County, two counties to the east. Today, about 95 percent of confirmed Lyme disease cases occur in 14 New England, Mid-Atlantic and Midwest states, according to the CDC.

Now, the tick study team is putting out brick-sized black bait boxes in which white-footed mice will treat themselves to kill immature ticks. Mice are lured into the boxes with an attractive food bait. As they move through the box, the mice brush against a wick that applies a tiny amount of the pesticide fipronil, which kills the ticks but does not harm the mice.

Use of the bait boxes is the next phase of a five-year project launched in January 2017 to evaluate several methods of tick control to develop an environmentally sensitive, effective and easily managed control package for suburban areas.

“Our goal is to identify an effective way to reduce tick populations and the associated spread of Lyme disease and other tick-borne illnesses, especially in suburban areas,” said project leader Andrew Li. Li is an entomologist with the ARS Invasive Insect Biocontrol & Behavior Laboratory in Beltsville, Maryland. “We want to identify vulnerable points in the lifecycle of the tick, so we can have the greatest impact for the least effort.”

Other control methods being tested, individually and in combination, include the bait boxes, ARS-patented “4-poster” deer treatment feeders, and a bioinsecticide spray Met52.

Mouse bait boxes are being placed near residential backyards adjacent to Blandair, Cedar Lane, Rockburn Branch and Wincopin Trail Parks, and the David Force Natural Resource and Middle Patuxent Environmental Areas in Howard County. Where Met 52 is used, it will be sprayed 3 feet on each side of the border between a residential backyard and the open park area at selected study sites.

This spring, the project also is repeating a mouse collaring effort that began last fall so individual white-footed mice can be tracked to see if the bait boxes change how the mice behave.

“Lyme disease and other tick-borne diseases significantly impact the quality of our lives here in Howard County. Learning ways to reduce the risk of infection by reducing the number of ticks in our parks and neighborhoods would be a tremendous benefit to the public,” said HCRP Deer Project manager Phil Norman of the Department of Recreation and Parks.