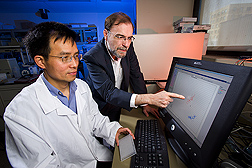 A correlation between obesity and genetics has been found to be modified by diet, according to a scientific paper in the American Journal of Clinical Nutrition. A research group led by a U.S. Department of Agriculture (USDA) scientist found that a specific gene—APOA2—can result in a higher body mass index (BMI).

The APOA2 gene encodes a protein that is part of high-density lipoprotein (HDL) cholesterol, so-called “good” cholesterol. An epigenetic mark, which can be thought of as a type of natural chemical decoration on the genome that regulates gene activity, can be induced and modified by environmental factors, such as dietary intake and lifestyle habits.

Led by molecular biologist Chao-Qiang Lai from Agricultural Research Service’s (ARS) Nutrition and Genomics Laboratory at Tufts University, Boston, the study found the same epigenetic mark also is likely associated with greater appetite, and this can result in greater food consumption and a higher BMI. This study is the first of its kind to take such an in-depth examination of a gene-diet interaction, one that pertains to obesity and the differential response to dietary saturated fat between individuals carrying variants of a specific gene, APOA2.

The research group started with 80 individuals and then replicated their initial findings in two additional populations. They found persons who took in a high-saturated fat diet and carried the APOA2 variant had a stronger epigenetic mark near APOA2. This variant has a role in regulating the activity of the APOA2 gene.

“Obesity is not simply a result of food intake alone. It is a product of genetic and environmental factors acting together,” says Dr. Jose Ordovas, the senior author and director of Nutrition and Genomics, the Jean Mayer USDA Human Nutrition Research Center on Aging (HNRCA) at Tufts University. “Among the latter, diet is the most important. We refer to these combinations of genetic and dietary factors acting together on a health outcome as ‘gene-diet interactions.’”

“In the current study, we sought to gain an understanding of the biological mechanisms driving this interaction between APOA2, saturated fat in the diet and obesity. We selected participants in three groups according to this genetic factor and conducted a series of molecular analyses,” says Lai. The group’s analyses identified an epigenetic mark—a genetic feature not directly governed by the genetic code—that is associated with saturated fat intake exclusively in subjects who carry this genetic factor. According to Lai, these discoveries could explain why individuals with this genetic factor consume more food and have a higher BMI.

In earlier studies, the research group found and replicated an interaction between dietary fat and a genetic variant of  APOA2 for the outcome of body weight. Specifically, greater consumption of saturated fats (found mostly in foods of animal origin) was associated with greater weight in people who carried this genetic factor.

The current research study identified biochemical, physiological and genetic processes that are involved in this common gene-diet interaction. “Altogether, these findings increase our understanding of how genetics and diet act together to promote weight gain and may eventually have implications for dietary recommendations that make use of genetic information,” says Lai.