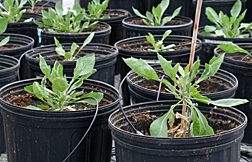 WASHINGTON, Dec. 21, 2017—With the year drawing to a close, the U.S. Department of agriculture's (USDA) Agricultural Research Service (ARS) is preparing for 2018 with renewed vigor, building on its scientific and technological accomplishments to date—from a food nutrient database that consumers can access with the click of a mouse to a natural tire rubber made from guayule, a small flowering shrub native to the southwestern United States.

"The three technologies we're highlighting today represent the many achievements and advances our scientists have made towards realizing these national priorities," said ARS Administrator Dr. Chavonda Jacobs-Young. "These technologies exemplify the spirit of scientific excellence and innovation that will continue into the New Year and beyond," she added.

These achievements illustrate just some of the many ways in which ARS research impacts Americans across the board-from producers and processors to consumers. To learn more about the latest ARS advances, visit the agency's News and Events site here.