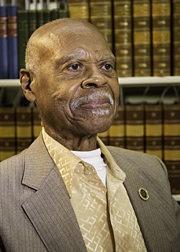 Ernest James Harris was an international leader in developing methods for controlling tephritid fruit flies that threaten crops around the world. He played an instrumental role in devising an approach for developing sterile Mediterranean fruit flies in time to control the first invasion into California in the 1970s, and the technique has effectively controlled the pest ever since. He had also worked with the U.S. Agency for International Development to control Medflies in Tunisia and Morocco. Harris also developed innovative techniques for mass rearing a beneficial wasp for use as a biocontrol (Fopius arisamus) that were so successful, they have been used to control fruit flies in Mexico, Africa, Israel, Brazil and several island nations in the South Pacific.

Read the press release for more information on Dr. Harris.