Is there such a thing as a perfect catfish? Research Geneticist Dr. Brian Bosworth, and Research Molecular Biologist Dr. Geoff Waldbieser believe there's always room for improvements — and they are making them. The two researchers at the ARS Warmwater Aquaculture Research Unit in Stoneville, MS have spent years developing catfish to address every conceivable issue, from size to disease, and more.

They have good reason: catfish remains one of the largest sectors of aquaculture in the U.S., with 320 million pounds of the fish processed last year, accounting for 75% of finfish production in the country. Their flaky white flesh, mild flavor, and affordability make catfish popular with consumers, and producers find them straightforward to raise because they tolerate a wide range of environmental conditions. In addition, Bosworth explains that catfish are "easy to reproduce, and go right onto the artificial diets, which consist mostly of corn and soybeans." They're also relatively abundant: 1 out of every 8 fish species (and roughly 1 out of every 16 vertebrate species) is a catfish.

What more could anyone want? For many years, more was exactly what everyone wanted — producers and consumers sought ever-larger catfish that meant lower prices at the fish counter. In fact, Bosworth and Waldbieser spent the early years of their research focusing on how to selectively breed for faster growing fish. As they did so, they gained new tools in their quest. For over 20 years, they have been using DNA markers to track the families of catfish they breed — a major improvement over the prior process.

Even to those who study them, "the fish all look the same," said Waldbieser, but "genetically, there was a lot of difference. [DNA analysis] helped us to get a handle on who's who, who's related."

One major result of their breeding program was a hybrid that has come to dominate the market. Among approximately 50 species of catfish found in North America, the most popular for commercial production has historically been the channel catfish. However, breeders have long known that crossing it with a closely related species, the blue catfish, resulted in hybrid vigor — a fish that was superior to either parent.

"We played a big role in developing that technology and getting it out to producers. The reproduction aspect is different and more difficult than for channel," said Bosworth. "In 2005, there were very few hybrids produced at all." 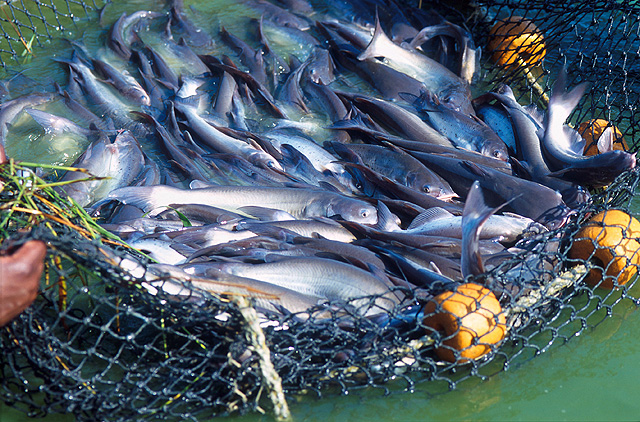 Today, he said, about 60% of the catfish being harvested are this type of hybrid, referred to as the F1 hybrid.

Another major innovation was improved aeration in ponds, which super-charged the intensity of fish production, from 3,000-4,000 pounds per acre 20 years ago to as much as 15,000 pounds today. However, the researchers didn't stop there. Today, they are extending the quest for ever-better catfish production into several other realms. One of the most important: fighting disease.

"Although catfish are hardy, there are significant disease issues in the industry," explained Bosworth.

A few diseases are of particular concern to researchers and farmers. Bacterial infections such as columnaris disease and enteric septicemia of catfish cause significant losses, along with proliferative gill disease, which is caused by a parasite that infects gill filaments and makes it hard for fish to breathe.

One part of the problem, according to Bosworth is that "catfish diseases are fairly hard to treat because you can't inject them the way you can with pigs. The best way to treat them if they are sick is in the feed, and when fish get sick, one thing they tend not to do is feed."

Another challenge is location. 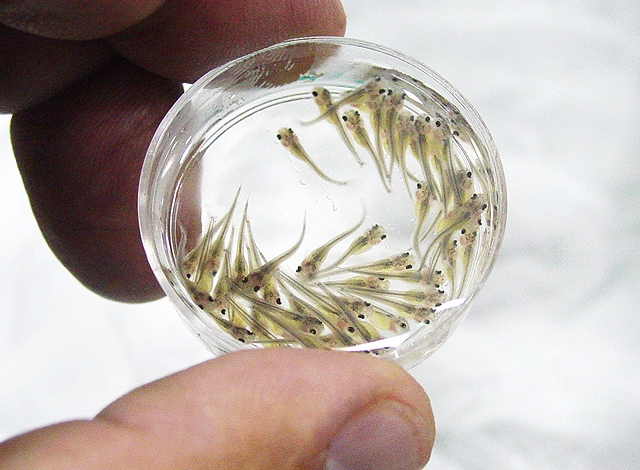 Hybrid catfish fry are maintained in hatcheries until they reach swim-up stage and begin to eat commercial fry feed. These fry are turning black, a sign that they are nearly old enough to accept feed. (Photo by Les Torrans, USDA-ARS, D4547-1)

"Some of these diseases really only happen in the pond, and to do a controlled disease challenge when you can't really set that up in the lab, that makes getting reliable data difficult," he said.

Nevertheless, the quest for solutions goes on.

"We have ongoing studies to determine if we can effectively select for disease resistance, or is it a better alternative to develop vaccines?" said Bosworth.

He and Waldbieser are aided in their search by colleagues who study catfish disease in other ARS facilities. Together, they are exploring a range of opportunities to improve fish producers' options.

In addition to disease, Bosworth added that they are "also looking at fillet quality, color, texture, and feed conversion efficiency," which is the rate at which animals turn food into edible flesh. However, that can be difficult to measure in individual fish.

While a superior hybrid has brought huge improvements to the catfish industry, there are still many new questions for Bosworth, Waldbieser and their colleagues as they continue their quest for the perfect catfish. — By Kathryn Markham, ARS Office of Communications

Sidebar: Catfish in the Kitchen

How do experts who've devoted their careers to studying catfish think it tastes best? For Dr. Bosworth, the answer is simple: "breaded and fried." For Dr. Waldbieser, it's Catfish Allison, a recipe that combines cheese, onion and a hint of spice. You can try it yourself here: https://www.uscatfish.com/recipes/catfish-allison/

Do you have a favorite way to prepare catfish? Connect with us on Facebook or Twitter and let us know!