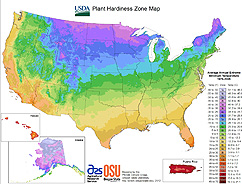 The new USDA Plant Hardiness Zone Map is more sophisticated and accurate than any other previously developed. Click the image for link to zone map web site.

Editions of the map

For the first time, the new map offers a Geographic Information System (GIS)-based interactive format and is specifically designed to be Internet-friendly. The map website also incorporates a "find your zone by ZIP code" function. Static images of national, regional and state maps also have been included to ensure the map is readily accessible to those who lack broadband Internet access.

"This is the most sophisticated Plant Hardiness Zone Map yet for the United States," said Catherine Woteki, USDA Under Secretary for Research, Education and Economics. "The increases in accuracy and detail that this map represents will be extremely useful for gardeners and researchers."

Plant hardiness zone designations represent the average annual extreme minimum temperatures at a given location during a particular time period. They do not reflect the coldest it has ever been or ever will be at a specific location, but simply the average lowest winter temperature for the location over a specified time. Low temperature during the winter is a crucial factor in the survival of plants at specific locations.

To help develop the new map, USDA and OSU requested that horticultural and climatic experts review the zones in their geographic area, and trial versions of the new map were revised based on their expert input.

Compared to the 1990 version, zone boundaries in this edition of the map have shifted in many areas. The new map is generally one 5-degree Fahrenheit half-zone warmer than the previous map throughout much of the United States. This is mostly a result of using temperature data from a longer and more recent time period; the new map uses data measured at weather stations during the 30-year period 1976-2005. In contrast, the 1990 map was based on temperature data from only a 13-year period of 1974-1986.

However, some of the changes in the zones are a result of new, more sophisticated methods for mapping zones between weather stations. These include algorithms that considered for the first time such factors as changes in elevation, nearness to large bodies of water, and position on the terrain, such as valley bottoms and ridge tops. Also, the new map used temperature data from many more stations than did the 1990 map. These advances greatly improved the accuracy and detail of the map, especially in mountainous regions of the western United States. In some cases, they resulted in changes to cooler, rather than warmer, zones.

While about 80 million American gardeners, as well as those who grow and breed plants, are the largest users of the USDA Plant Hardiness Zone Map, many others need this hardiness zone information. For example, the USDA Risk Management Agency uses the USDA plant hardiness zone designations to set some crop insurance standards. Scientists use the plant hardiness zones as a data layer in many research models such as modeling the spread of exotic weeds and insects.

Although a poster-sized version of this map will not be available for purchase from the government as in the past, anyone may download the map free of charge from the Internet onto their personal computer and print copies of the map as needed.