Carbohydrates affect your blood glucose level (the amount of sugar in your blood), since your body converts carbs into sugar. Carbs are fuel for the body, but too many of the wrong kinds of carbs can mean increased blood sugar levels. 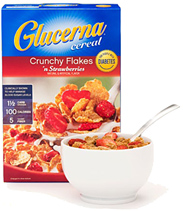 Chemist Greg Cote and geneticist Tim Leathers with the USDA-ARS National Center for Agricultural Utilization Research in Peoria, IL, developed and patented food-grade bacteria whose enzymes can be used to convert sugar into a slow-release carbohydrate-based sweetener. They teamed with Cargill, Inc., under a cooperative partnership trust fund agreement. Cargill came to USDA-ARS because the team has scientific expertise in developing new technologies for converting renewable agricultural materials into high-value chemicals, enzymes and polymers.

The partners surveyed more than 100 bacteria and compared them to ARS' enzyme. It turns out that the ARS enzyme was superior to the others. Cargill licensed ARS' technology, which led to the discovery of a novel low-glycemic-index sweetener, called Xtend™ sucromalt. The glycemic index ranks carbohydrates in foods by the effect it has on blood sugar levels. Low-glycemic-index foods keep blood sugar levels lower.

Sucromalt provides natural sweetness for products such as nutritional beverages and bars, cereals, ice cream, jams and jellies, and yogurts. The product is named sucromalt because it is derived from a combination of sucrose (cane or beet sugar) and maltose (corn sugar). Cargill is commercially producing Xtend™ sucromalt as a food ingredient, rather than a finished food product. Cargill's sucromalt ingredient offers food and beverage manufacturers a natural and slow-release carbohydrate syrup. The slow and complete digestibility of sucromalt makes it unique among sweeteners. In food and beverages, sucromalt releases its carbohydrates into the bloodstream slowly, which results in more stable blood sugar levels, versus a fast release that results in rapid increases in blood sugar levels followed by quick drop-offs.

Commercial products like Glucerna® use sucromalt as an ingredient in some of its low-glycemic food products, such as its cereals and select shakes. These products are designed to help people with diabetes minimize blood sugar spikes when used as part of a diabetes management plan, while still offering sweetness and taste.