Agricultural Research Service scientists and their Chinese colleagues have identified a specific metabolic pathway that controls how honey bees apportion their body's resources such as energy and immune response in reaction to stresses such as winter's cold temperatures, according to recently published research.

This cellular pathway has the strongest connection yet found to the large overwintering colony losses that have been plaguing honey bees and causing so much concern among beekeepers, and farmers, especially almond producers, during the last 15 years, said entomologist Yanping "Judy" Chen, who led the study. She is with the ARS Bee Research Laboratory in Beltsville, Maryland.

The "signaling" pathway governs the increased and decreased synthesis of the protein SIRT1, one of a family of proteins that help regulate cellular lifespan, metabolism and metabolic health, and resistance to stress.

"In honey bees merely exposed to a cold challenge of 28 degrees C (82.4 degrees F) for five days, we saw almost three-fold lower levels of SIRT1 and significantly higher levels of colony mortality compared to bees maintained at 34-35 degrees C (93.2-95 degrees F), which is the optimal core temperature of a honey bee cluster inside a bee hive in winter," Chen said. 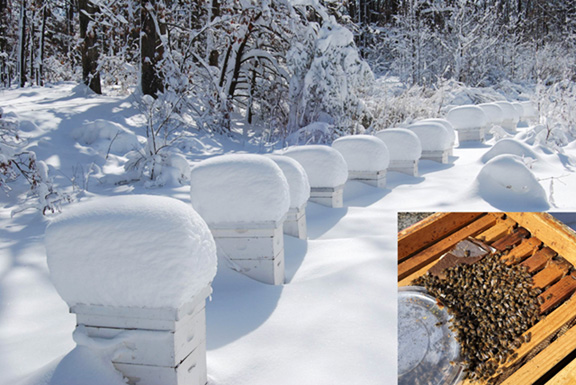 Honey bees survive winters in cold climates by forming a thermoregulating cluster around the honey stored in the colony. Recent research showed overwintering colony losses are linked to a specific metabolic pathway connected to how bees apportion their energy resources. (Photo by Jay Evans and Judy Chen, ARS).

The researchers also found that bees under cold stress were associated with an increased risk of disease infections, which in turn led to an increased likelihood of colony losses.

For example, when honey bee colonies were inoculated with the intracellular microsporidia parasite Nosema ceranae, and kept at 34 degrees C, they had a survival rate of 41.18 percent while the mortality rate of the colonies exposed to the cold stress of 28 degrees C for 5 days was 100 percent.

"So that showed it is primarily cold stress that the SIRT1 signaling pathway is responding to rather than pathogens," Chen said. "Our study suggests that the increased energy overwintering bees use to maintain hive temperature reduces the energy available for immune functions, which would leave overwintering bees more susceptible to disease infections; all leading to higher winter colony losses."

Chen points out this research also offers a promising avenue for new therapeutic strategies to mitigate overwintering and annual colony losses. One way could be by raising the production of the SIRT1 protein by treating honey bees with SRT1720, a specific SIRT1 gene activator being experimentally used as an anti-inflammatory and anti-cancer treatment.