Seven new sources of edamame soybeans are now available for use in breeding commercial varieties that can resist insects and disease, according to Agricultural Research Service (ARS) and University of Illinois Urbana-Champaign (UIUC) scientists.

Edamame is the name for soft, immature soybeans that can be eaten, often steamed right in the pods and seasoned with salt or as a snack food. Most edamame eaten in the United States is imported frozen from China and other countries in East Asia.

However, American consumers' increasing interest in the potential health benefits of eating edamame has prompted some growers to explore producing the vegetable crop domestically, raising the potential for fresh market sales in addition to frozen ones.

Researchers from the ARS Soybean and Soybean/Maize Germplasm, Pathology, and Genetics Research unit in Urbana and UIUC's Department of Crop Sciences have teamed up to support the push for an increase in domestic production of edamame through studies on weed control, optimal planting densities, seed quality and, most recently, developing varieties with resistance to insect pests and disease.

Toward that end, the team began an examination in 2011 of resistance genes known to protect grain-type soybeans, which account for America's second-largest cash crop and are processed into everything from cooking oil and high-protein livestock feed to biofuel and industrial products including printing ink and adhesives.

In particular, the team set its sights on two genes that protect resistant soybean varieties from the soybean aphid, Aphis glycines, and one that confers resistance to the fungus responsible for Phytophthora stem and seed rot, namely Phytophthora sojae. 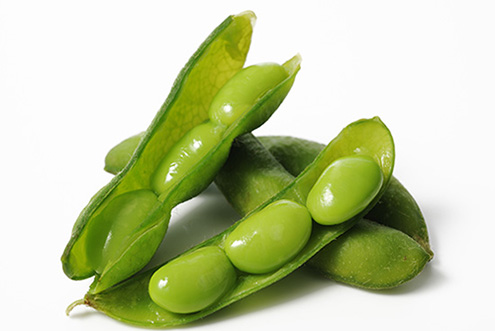 Approximately 90 percent of U.S. grain-type soybean varieties carry genes for resistance to some diseases and pests unlike the edamame varieties, which aren't known to have such genes. According to Glen Hartman, a research plant pathologist who leads the ARS unit at Urbana, edamame breeding efforts thus far have focused on agronomic traits important to local growing conditions and mechanized harvest.

Unchecked with chemical controls or genes for resistance, Hartman added, susceptible edamame varieties could succumb to damage from severe infestations of the sap-sucking aphids and outbreaks of Phytophthora root and stem rot, which can inflict seedling stand losses of up to 100 percent.

With that concern in mind, the team used conventional plant breeding methods to pass genes for resistance from four commercial grain-type soybean varieties into four large-seeded edamame varieties. Offspring plants with the best combination of resistance and other desired traits were then evaluated further in 2019 field trials.

The seven germplasm lines were chosen not only for their aphid and Phytophthora resistance, but also size, taste and other seed traits, as well as adaptability across wide-ranging maturity groups.

Limited quantities are available upon request to qualified professional plant breeders and other research scientists from the ARS National Plant Germplasm System.