Saltier Groundwater Does Long Lasting Damage to Almonds, But Less Than Previously Feared

RIVERSIDE, Calif., January 26, 2022—When salty groundwater is used to irrigate almond orchards, production can be significantly reduced and the damage to trees can last for years, according to Agriculture Research Service studies.

Years of droughts in central California, the primary growing region for the state's $6-billion-a-year almond industry, have forced producers to draw ever deeper from aquifers to replace limited higher-quality surface water to quench thirsty almond trees.

As groundwater levels have declined with pumping and drought, the quality of extracted groundwater in some areas also has declined as wells have had to reach deeper into levels with sediments of higher salinity. The higher salt content of this groundwater poses a significant threat to productivity with almond farmers reporting yield losses of more than 30 percent.

To investigate the impact that elevated salinity levels have on almond harvests under real world conditions, Agricultural Research Service (ARS) scientists at the U.S. Salinity Laboratory in Riverside, California, and the San Joaquin Valley Agricultural Sciences Center in Parlier, California studied multiple locations in three commercial almond orchards—two in the western San Joaquin Valley (SJV) and one on the eastern side of SJV.

Western SJV groundwater is three times saltier mainly because the aquifer floor there consists of marine-origin deposits, which are naturally higher in salts.  In the eastern SJV, the aquifers lie over riverine sediments from Sierra Nevada granite, so are less saline and the ground water is about 0.5 dS/m. 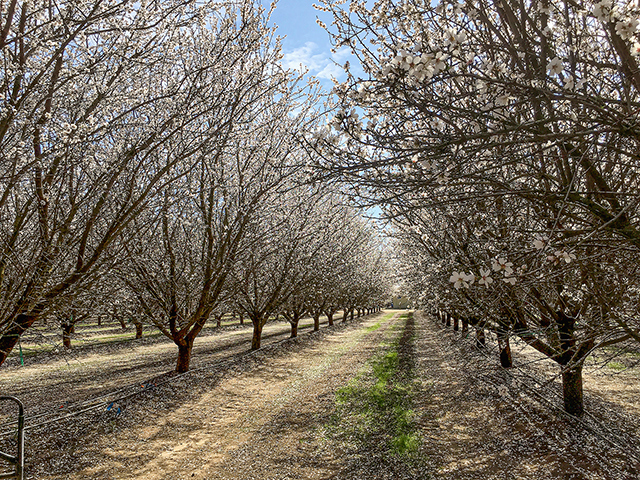 "So it is not surprising that almond trees in the western SJV are seeing more damage from higher amounts of salinity as growers are forced to substitute ground water for surface water. However, previous models predicted a yield loss of more than 60 percent with the soil salinity we measured, so almonds have greater salt tolerance than we previously thought " explained ARS soil scientist Ray Anderson, with the Agricultural Water Efficiency and Salinity Research Unit in Riverside, who led the research.

Exacerbating tree damage are the efforts growers have been taking to be more efficient with all irrigation water. Conventionally, growers have flooded orchards with surface water, which washes out salt build up in the soil. Now they are using drip irrigation, which can cut water use by up to 50 percent.

But drip irrigation also concentrates irrigation water directly to the root zone of each tree. As droughts and surface water curtailment become worse, there is little or no opportunity to flood orchards and move built up salts away from the roots.

Still the most unexpected finding from their research was how lasting the impact of exposure to higher salinity groundwater was, according to Anderson.

"Even a few years of exposure to high salinity groundwater had hangover effects that persisted for multiple seasons and manifested itself in many ways, including increased tree mortality and canker. So while the trees had more salt tolerance than we first thought, there were more lasting effects," he said. "Because of this hangover effect, it is better to minimize use of the high salinity groundwater."

What this work shows is that water quality may be equally as important as water quantity. They both need to be actively considered right alongside each other, Anderson explained.

"And groundwater may not be as effective of a bridge for drought years, as we have previously believed," he said.