Getting a fix on the timing of seasonal plant events like fruiting or leaf senescence could get easier to do, thanks to time-series images captured by PhenoCams—tower-mounted digital cameras operated by scientists participating in the Long-Term Agroecosystem Research (LTAR) network.

Led by the Agricultural Research Service (ARS), LTAR uses experimentation and coordinated observations from 18 federal, non-government and university research sites across the country to develop a national "roadmap" for the sustainable intensification of agriculture. The effort, begun in 2012, takes aim at two simultaneous goals. The first is providing food, fiber, feed and fuel for a growing world population likely to surpass 9 billion individuals by 2050. The second is making sure soil, water and other natural resources aren't overtaxed in the process—including important ecosystem services, like water filtration and nutrient recycling.

In partnership with the PhenoCam Network, ARS ecologist Dawn Browning and her LTAR team are using data generated from time-series images to measure how climate change can impact plant phenology (seasonal timing of plant events) in three types of agroecosystems: crop land, grazing land and combinations of the two.

"Understanding how higher temperatures, more frequent drought and flooding events, and shifts in the timing and amount of rainfall influence the seasonal dynamics of forages and crops can guide decisions about best practices to adopt or adapt to decrease risk of loss and sustain yield," said Browning, with the ARS Range Management Research Unit in Las Cruces, New Mexico. 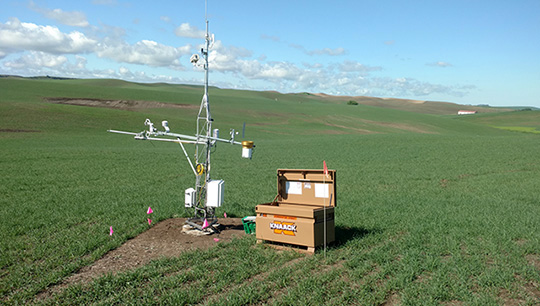 The Long-Term Agroecosystem Research (LTAR) network is helping scientists use data from time-series images to measure how climate change can impact seasonal plant events, like fruiting or leaf senescence.

Although several sensor technologies, including satellite-based ones, are available for obtaining measures of plant phenology such as canopy greenness and area, there's little information on how data generated by each correlates at the continental scale, noted Browning, lead author of a paper to be published in the journal Ecological Indicators.

To find out, she and collaborators from more than a dozen ARS locations and state universities analyzed phenological data generated by three different sensor platforms: Landsat satellite, PhenoCam towers and eddy covariance stations. The latter measures the exchange of gases like CO2 between the soil, air and vegetation within a defined area.

Based on the results, the team devised an evaluation tool, called the "metric assessment framework," that, for the first time, shows where and how phenological estimates derived from the three sensors complement, diverge from or duplicate one another. For example, Landsat-based estimates for growing season length were significantly longer than those generated from PhenoCam and eddy covariance data, while the latter two sensors provided high-resolution, on-the-ground details and metrics not possible with an orbiting satellite.

Browning said the framework's use should improve the selection of sensor instrumentation used by producers, land managers and decision makers to model, monitor and forecast the plant phenology of agroecosystems across the country, helping ensure their peak productivity and continued health and use for future generations as well as food security challenges to come.