Piglets born to heat-stressed sows may carry the burden of their mom’s discomfort later in life in the form of health complications and diminished performance. Now, this so-called "in utero heat stress" may also hypersensitize the piglet’s immune system, potentially doing more harm than good to the young animals, a team of Agricultural Research Service (ARS) and university scientists has learned.

Pigs are more susceptible to heat stress due to an inability to sweat. This places them at greater risk of health and production problems that can add up to millions of dollars annually in revenue losses to swine producers.

Research has shown that pigs experiencing heat stress during pregnancy can predispose their offspring to complications later in life that can lead to diminished performance, including efficient feed use, growth rate and ultimately, pork production. However, less is known about how this heat stress affects their offspring’s innate immunity, or first-line defense against disease-causing bacteria and other pathogens, noted Jay S. Johnson, an animal scientist at the ARS Livestock Behavior Research Unit in West Lafayette, Indiana. 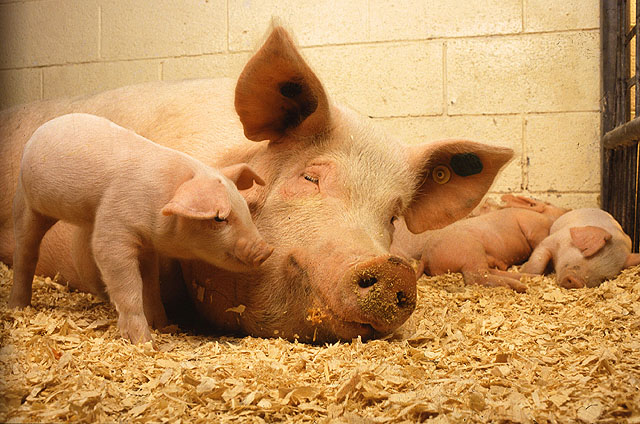 Pigs that experience heat stress while pregnant can predispose their offspring to health complications and diminished performance later in life.

To learn more, Johnson teamed with his ARS laboratory colleagues and scientists from the Purdue University in West Lafayette, Indiana; the Oak Ridge Institute for Science and Education in Oak Ridge, Tennessee; and the University of Missouri in Columbia, Missouri.

Following established animal care and welfare guidelines, the team evaluated two groups of piglets. The first group consisted of 16 piglets born to mothers exposed to stressful temperature cycles ranging from 79 to 97 degrees Fahrenheit during the first half of pregnancy. The second group of 16 were born to moms exposed to a “comfortable” 64 degrees Fahrenheit.

The researchers then simulated a pathogen attack on the piglets using lipopolysaccharide, a molecule found in the cell walls of some bacteria. Blood samples were drawn to monitor certain markers of the piglets’ innate immune response, including glucose, insulin, non-esterified fatty acids, cortisol (a stress hormone) and cytokines (markers of inflammation). These, along with white blood cell counts, were compared to a lipopolysaccharide-free group of piglets used as controls.

Among their findings, reported in the December 2020 issue of the Journal of Animal Science, the researchers observed:

Johnson said their research dovetails with increasing concern over the potential impacts of global climate change on swine welfare and management—especially in regions of the world prone to frequent or prolonged drought and heat waves.

With support from USDA's National Institute of Food and Agriculture, the team is also taking a genomic approach to preempting the effects of in utero heat stress on piglets. Of particular interest is using genomic markers to flag traits for improved heat tolerance in sows used for breeding.

"To achieve this goal, we are partnering with two major swine breeding companies," Johnson said. "Our hope is that completion of this project will provide swine producers with a cost-effective strategy to reduce the negative impact of in utero heat stress on swine in the United States and globally."