Penicillium rubens strain NRRL 1951 is better known as the mold behind large-scale production of the powerful antibiotic penicillin. Today, it became the official State Microbe of Illinois in a bill-signing ceremony that included representatives of the Agricultural Research Service (ARS) facility where advances in deep-tank fermentation more than 77 years ago helped make the mold's life-saving drug available for use on the frontlines of World War II.

Starting in the early 1940s, a team of scientists from the University of Oxford in England and the then-named USDA Northern Regional Research Laboratory (NRRL) in Peoria, Illinois, devised methods of growing the mold and producing yields of penicillin that surpassed anything achieved before. Industry's adoption of these methods came just in time to treat Allied soldiers wounded during the invasion of Normandy, France, which began June 6, 1944.

Today's signing of bill HB1879 into law—77 years, two months and 11 days later—designates strain NRRL 1951 as an official state symbol commemorating the mold's importance to humanity and the team's scientific innovations at the laboratory, now known as the National Center for Agricultural Utilization Research, operated in Peoria by ARS. 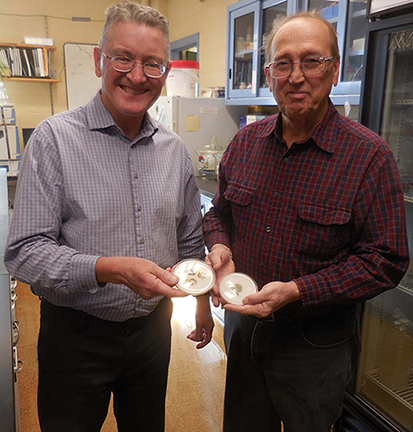 Ironically, the mold strain was discovered growing on a cantaloupe at the local market, not far from the laboratory. The scientists' studies showed that when grown in vats of corn-steep liquor and other nutrients, the mold churned out more penicillin than the Penicillium strain originally discovered by Alexander Fleming in 1928. The unprecedented yield of penicillin and reduced cost of making the antibiotic weren't just crucial to saving the lives of thousands of Allied soldiers; the advance also ushered in new era of pharmaceutical drug production.

That same spirit of scientific innovation continues at the Peoria research center today, including its curation of the ARS Culture Collection, which houses more than 100,000 strains of bacteria and fungi—strain NRRL 1951 among them. ARS's Culture Collection also is the largest, single collection of beneficial microorganisms in the world.

In the 1940s as today, microbes drive much of the center's research—from low-glycemic sugars for consumers, to cleaner-burning biofuels and beyond.

Watch these videos to learn more about the Peoria center's penicillin contributions and ARS Culture Collection.