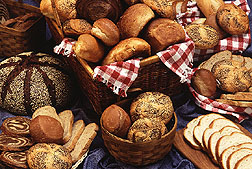 Microbe with Taste for Stale Bread Finds Its Calling

Researchers are enlisting mighty microbes in the fight against food waste.

An Agricultural Research Service (ARS) team in Peoria, Illinois, has devised a procedure for using bacteria to convert glucose from bread waste into value-added products such as ascorbic acid (vitamin C), which is used in everything from food and beverages to pharmaceutical and personal-care products, a U.S market valued at over $1 billion in 2018.

By one estimate, 12.5 million tons of bread, rolls, croissants and other baked goods go uneaten worldwide each year. Some of this food waste is fed to livestock as a source of carbohydrates and protein; however, the remainder can pose a disposal problem.

Fortunately, the adage "One man's trash is another man's treasure" still holds true—with the help of Pseudomonas reptilivora bacteria.

According to Saha, a research chemist with the center's Bioenergy Research Unit, 2KGA is a so-called "platform chemical" that helps synthesize bulk quantities of erythorbic acid, ascorbic acid, ascorbic acid salts, and other substances with wide-ranging food and industrial applications. 2KGA itself can also be used as a detergent builder, cement plasticizer and precursor chemical for herbicide compounds.

The team's hope is that with continued research and scale-up, the glucose-hungry bacteria will offer a biobased alternative to synthetically producing valuable chemicals like vitamin C from 2KGA—and simultaneously help tackle a food-waste issue.

Synthetic production methods for 2KGA are costly and dependent on harmful oxidizing agents among other drawbacks. There are also fermentation-based methods of producing 2KGA using other types of microbes. However, they require the addition of nitrogen, mineral salts and other costly nutrients, noted Badal. That's not the case with P. reptilivora, which does just fine on a diet of glucose-rich bread wastes (once it's been rendered into a slurry using distilled water and enzymes, that is).

The advance, which the team reported in the March 2020 issue of Biomass Conversion and Biorefinery, is part of the ARS center's overarching mission to develop new, value-added uses for agricultural commodities, especially if they can ease the reliance on raw materials made from fossil fuels.

In this instance, the team's efforts began with the center's ARS Culture Collection, which houses tens of thousands of microbial specimens collected from around the world. Many of these microbial holdings are valued for their pharmaceutical, agricultural, industrial, food and other applications, including P. reptilivora, which was originally added to the collection in the 1940s as strain NRRL B-6.

Initially, the microbe was considered an unwelcome contaminant in fermentation procedures. Now, that same fondness for fermentation conditions could prove key to making substance that not only improve the quality and shelf-life of food, but also keep it out of the trash bin.