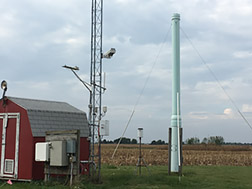 ARS and cooperating scientists in 10 states are using 20-foot-high "bug vacs" to capture critical data about the whereabouts of soybean aphids and other flying insect pests. Photo by Doris Lagos-Kutz

The third week of May, Agricultural Research Service (ARS) scientists Doris Lagos-Kutz and Glen Hartman venture to a nearby field to set a timer on a smokestack-like device that rises 20 feet into the air and serves a single purpose: to capture winged insects such as aphids (notably, soybean aphids), thrips and other potential soybean pests.

Known as a "suction trap," the fan-driven device is one of about 30 that are whirring away in 10 states as part of a network to gather yearly seasonal data on the migratory flight patterns and geographic distribution of the soybean aphid, Aphis glycines. Ultimately, such information can help improve the timing and use of counter measures to mitigate the harm caused by the sap-sucking insect, an invasive species from Asia that's become a major pest of America's $40.9 billion soy crop since its discovery in 2000.

If insecticides, resistant cultivars and biological control are analogous to the weapons of war on the soybean aphid, then the traps might be likened to a chief means of collecting valuable "intel" on the pests, noted Lagos-Kutz, a research associate, and Hartman, a plant pathologist with the ARS Soybean/Maize Germplasm, Pathology and Genetics Research Unit in Urbana, Illinois.

In that state and others, the traps run from 7 a.m. to 8 p.m. each day from mid-May to mid-October, drawing in air at the rate 60 cubic meters per second—a force that plucks small, airborne insects straight from the skies and directs them into a plastic jar filled with a specimen-preserving solution of water and anti-freeze. A mesh screen over the traps' top prevents larger winged critters like bats and birds from meeting a similar fate.

Upon receiving suction trap samples collected by research station collaborators, Lagos-Kutz and Hartman sort and otherwise process the contents of the jar once a week in their laboratory. They refer to the slurry of wings, legs, bug bits and unseen microorganisms that live on or in the hapless insects as an "aerobiological soup." The term also reflects the richness of data that can be gleaned from the traps about where insects move around, mainly in the summer and fall season.

David Voegtlin of the Illinois Natural History Survey originally conceptualized the data collection and analysis effort in 2001. Known as the "Suction Trap Network" (STN) its success today is a testament to the collaboration of participants in multiple states, noted Lagos-Kutz. These include Illinois, Indiana, Iowa, Kansas, Louisiana, Michigan, Minnesota, Missouri, Nebraska and Wisconsin. Support for the STN over the years has been in part provided by the North Central Soybean Research Program and the ARS project, "Integrated Management of Soybean Pathogens and Pests."

Some findings to emerge from the effort include:

Suction trap data is also yielding valuable information about other insect species, including thrips and mosquitoes. Studies of nine mosquito species, for example, have revealed symbiotic bacteria that influence the biology, reproduction and ability of their blood-feeding hosts to transmit parasites and pathogens, opening the door to new ways of controlling those that cause human disease.

Other applications for suction trap data include tracking pest populations with traits for insecticide resistance, studying the effects of changing climate or habitat areas on pest populations, and detecting expansions of pests into new areas, like the sugarcane aphid, which moved into Kansas (Manhattan), Missouri (Columbia and Portageville), Louisiana (Chase) and northern Wisconsin.

Details of the project were published in the March 2020 issue of American Entomologist by Lagos-Kutz, Hartman, Voegtlin and their co-authors.

Expansion of the suction traps into new states could also help paint a fuller picture of the "air microbiome," namely, the community of microbes in transit within flying insects. Similar studies are underway of microbiomes in soil, water and even the human body, noted Hartman.