Skip to main content
ARS Home » News & Events » News Articles » Research News » 2019 » To Press or Not to Press: That is the Question 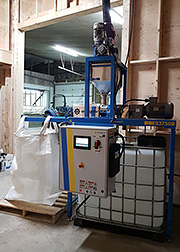 To Press or Not to Press: That is the Question

WASHINGTON, DC, March 25, 2019—Results from a joint study by Agricultural Research Service (ARS) and Drexel University (DU) scientists will help farmers better weigh the merits of pressing soybeans on-site rather than transporting their crop to a crush (processing) facility, where the oil and meal can be extracted for sale.

Second only to corn in terms of crop value and total U.S. acres planted, soybeans are the chief source of vegetable oil for cooking and other food uses. Meal left over from pressing the beans is sold as high-protein animal feed. There are also nonfood uses of soy oil, including inks, lubricants, paints and biodiesel fuel.

In some instances, soybean growers are opting to press the oil right on the farm rather than send their beans to a dedicated crush facility. This allows them to cut operating costs and sell the pressed oil directly or use it as a source of "home-grown" energy, such as for heating oil, straight engine fuel or processed biodiesel, which is cleaner-burning than diesel fuel derived from crude oil.

However, there’s been little research examining when and where it makes the most economic sense to press the beans for edible oil or energy uses, notes Paul Adler, an agronomist with the ARS U.S. Pasture Systems and Watershed Management Research Unit in University Park, Pennsylvania.

"The first question for a farmer is: 'Does it make sense to press our soybeans?' The second question is: 'How should I use the soybean oil—as a source of on-farm energy or food applications?’" says Adler. "This can be an economic decision or one based on more personal considerations such as reducing fossil fuel use or the greenhouse gas (GHG) footprint of farming."

To find out, Adler and ARS colleague Fred McNeal teamed with DU cooperators Megan Hums and Sabrina Spatari to conduct a life-cycle assessment (LCA) of three on-farm energy uses of soy. They compared the profitability and GHG emissions of each to growing the beans for sale whole or as meal together with the pressed oil.

Among results published in the February 2019 issue of the Journal of Cleaner Production:

Adler said farmers should carefully weigh these and other factors before investing in pressing equipment necessary to extract soy oil on-site, whether it be for sale to food-use markets or energy production. There are also other oilseed crops to consider, too, he added—like canola and camelina, as well as prairie grasses that can be grown on marginal cropland and used for biofuel or energy.