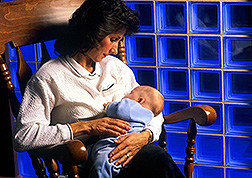 Breast feeding increases the presence of a gut bacteria that may improve vaccine response in infants.

DAVIS, CALIFORNIA, June 18, 2019—Higher levels of a customary gut bacteria enhanced by breastfeeding in early infancy were found to be coupled with an improved response to vaccines in infants through two years of age, according to a first-of-its-kind study by Agricultural Research Service (ARS) scientists and their colleagues.

Infants in the study, who were all breastfed from birth to at least 15 weeks, developed a healthy abundance of bacteria from the genus Bifidobacterium in their gut microbiome—the complete community of microorganisms (such as bacteria, fungi, and viruses) that inhabit the intestinal tract.

Breast milk is known to have special carbohydrates that encourage the growth of Bifidobacterium. Breastfeeding, long known to benefit infant health, partially acts by encouraging the growth of beneficial bacteria such as Bifidobacterium in the baby's gut. In the United States, most infants (83.2 percent) start out being breastfed, but many people stop earlier than recommended, according to the 2018 Breastfeeding Report Card by the Centers for Disease Control and Prevention.

Infants with the highest Bifidobacterium levels when they were vaccinated before 15 weeks of age had responses to tuberculosis, polio (oral), tetanus, and hepatitis B vaccines that were from 42 percent to 107 percent higher than infants with the lowest Bifidobacterium levels. And the higher response lasted until the infants were about two years old, when the study ended.

"We know that individuals' responses to vaccination vary greatly and that the protection provided differs substantially between people. But we really don't know why," said Charles B. Stephensen, research leader of the Immunity and Disease Prevention Research Unit at the ARS Western Regional Human Nutrition Center in Davis, California, and co-lead of the study. "This may prove to be one of the factors that influences the amount and duration of a vaccine response, although right now we have only established a correlation, and not cause and effect."

The initial response by antibody-generating plasma cells and T cells, which provide memory to vaccines, was strongest in the infants where the most abundant inhabitants of the gut microbiome were members of the genus Bifidobacterium.

All the infants in the study were breastfed from birth to at least 15 weeks and just over half continued to be breastfed until they were two years old. This observational study took place in Dhaka, Bangladesh among infants already enrolled in a study examining the effect of vitamin A supplementation that was being conducted with funding from the World Health Organization. Analyzing those samples to characterize the microbiome was an added benefit.

"Perhaps the most surprising result was how persistent the enhanced vaccine response remained. Even though vaccination occurred before four months, the babies continued to show the heightened vaccine response for at least another 20 months," said Stephensen.

The infant gut starts out nearly sterile and usually establishes a base-line microbiome in the first six weeks. At the same time, the infant immune system is still developing and is learning, partly through exposure to microorganisms, how to respond to the infant’s new, non-sterile environment. Normal members of the gut microbiome, including Bifidobacterium, seem to help in this task.