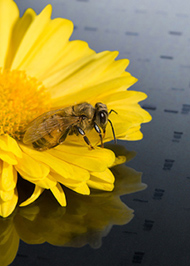 Deformed Wing Virus, a leading cause of honey bee losses, has been found to be more genetically diverse than previously thought

BELTSVILLE, MARYLAND, October 24, 2019—Deformed Wing Virus (DWV), one of the leading causes of honey bee colony losses, is much more genetically diverse in the United States than previously thought, according to a study published by Agricultural Research Service (ARS) scientists in PLoS Biology.

The diverse lineages of this virus are all equally bad for bees, and they make it more complicated to develop antiviral therapeutics, which could be the basis for developing a vaccine for the virus.

The high level of genetic diversity was found among the virus population within individual honey bees as well as within bee colonies. About nine percent of the nucleotides in DWV's RNA have polymorphic variants (places in the genetic sequence with natural alternatives) that are present at numbers higher than half of one percent of the virus population. This corresponds to 100 million to 1 billion virus copies for any single divergent genetic position in an infected individual bee.

"We found the genetic makeup of DWV in the United States is showing marked expansion in diversity after going through a strong bottleneck event, probably the arrival in the United States of the Varroa mite in the 1980s. Varroa seems to cause a dramatic loss of DWV genetic diversity in honey bees, because transmission by the mites favors a few more virulent strains," said virologist Eugene Ryabov, an International Fellow with the ARS Bee Research Laboratory, who led the study. ARS researchers Jay Evans and Judy Chen also worked on this study.

"Differences in the genetic sequence of virus highlight the importance of analyzing DWV in different locations in the United States and in other countries so we will be able to track how the virus evolves," Ryabov said.

This study employed a new reverse-genetics system for the first time that makes it possible to assess the virulence of United States DWV populations. This required making a series of cloned DNA copies of DWV RNA variants. DWV naturally has only RNA which allows more copies of each variant to be made. By infecting honey bees with these cloned DWV variants individually or in combinations under laboratory conditions, the researchers can track which variants are virulent.

The discovery of these high levels of genetic diversity indicates the job of developing new treatments or a vaccine targeting DWV is going to be much harder than scientists previously thought.

With a divergent virus population such as in the United States DWV, there are likely to be variants already present in the population with the potential to not be affected by any genetic sequence-specific treatments. What was a minor fraction of the virus population could then quickly become predominant once the targeted variants are eliminated.

"For now, the best thing that beekeepers can do to cut the amount of damage from DWV is to limit virus levels by treating for and reducing exposure to Varroa mites, which spread the virus," Ryabov said.