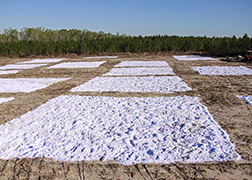 The Agricultural Research Service (ARS) is helping to arm the U.S. military with a solution to two major environmental problems: the disposal of paper waste and revegetating damaged training grounds.

Under federal regulations, U.S. Army classified papers must be pulverized to a fine consistency, which leaves the material unsuitable for recycling. Continued disposal of this waste in landfills presents environmental concerns and is expensive. Secondly, army training areas become barren of vegetation from constant use by heavy equipment and foot soldiers. Soil erosion can occur, making it difficult to reestablish native grasses.

ARS teamed up with the U.S. Army Corps of Engineers to help address these issues. Their research focused on evaluating the use of pulverized or finely ground paper as a soil amendment to improve soil health and the ability to establish desirable native grasses on degraded Army training lands.

Pulverized paper, which is like a very fine confetti, is a cheap, high-quality organic material that is useful as a soil amendment, said Henry "Allen" Torbert, research leader at the ARS National Soils Dynamics Laboratory in Auburn, Alabama. ARS worked with the Army to determine the right rates of application and to make sure there were no environmental concerns from the application of paper.

Earlier trials conducted on research plots, located in Fort Campbell, Kentucky and Fort Benning, Georgia, showed positive results for vegetation restoration where a processed waste paper product material was applied. This recent study, published in Elsevier in 2019, on the finely ground paper was conducted at Fort Polk, Louisiana by Torbert and Ryan Busby, an ecologist with the U.S. Army Engineer Research and Development Center. It demonstrated that adding this type of paper waste to Army training grounds improves soil health, increases growth of native grasses and provides a solution for disposing classified paper waste.

Using the material as a soil amendment also is a big economic win, according to Torbert.  Native plant establishment was improved, with plant cover 45 percent higher on sites with the recommended application rate compared to controls. Pulverized paper material applied at the recommended application rate on training grounds resulted in a cost savings of approximately $4,700 per acre—an estimated annual cost savings of $20,000 for each military facility—with 70 tons of paper diverted from landfills.

There is also an environmental benefit as restoring the plant cover protects the soil from erosion, promotes the accumulation of soil carbon and provides improved wildlife habitat, according to the scientists.

The Corps of Engineers has published a "Users Guide," based on this research, for use by all U.S. military facilities, according to Torbert.