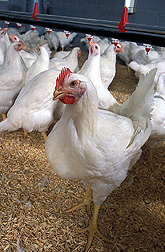 Marek's disease—a highly contagious viral disease caused by a herpesvirus—is a constant threat to poultry worldwide. It is also one of the most preventable diseases with vaccination. However, while vaccines prevent poultry from becoming sick with symptoms of the virus, they do not prevent virus spread and mutation—considered the main reason for increased virus virulence, or severity, in field strains in U.S. commercial flocks.

To help improve the control of Marek's disease, veterinary medical officer John Dunn and his team at the Agricultural Research Service (ARS) Avian Disease and Oncology Laboratory in East Lansing, Michigan, analyzed Marek's disease genomes to find out which genes are mostly associated with virulence. They sequenced DNA from 70 virus strains, collected over the years from across the United States, and identified significant genetic variants—mutations—associated with Marek's disease virulence.

The study, published recently in the Journal of General Virology, also revealed that high virulence strains collected from the same farms in the last three years and in the 1990s were nearly identical. This illustrates the ease with which virulent Marek's disease viruses can persist and spread between flocks as well as the difficulty in eradicating the disease from a farm once established, Dunn said.

Another finding worth noting was that new strains were no more virulent than older strains, which may suggest that current management and vaccine practices have slowed the ongoing evolution of the virus, according to Dunn. Litter management to reduce viruses in the environment and optimize the microbial environment of the chickens is a critical component of bird health, even with good protection from vaccines.

The next step is to validate markers associated with virulence to determine if these markers may provide an alternative to live bird testing for evaluating virulence of new Marek's disease field strains.

The U.S. Poultry and Egg Association contributed to the funding of this research, according to Dunn.