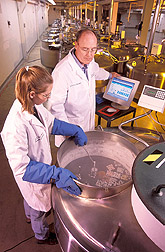 A One of a Kind Collection Reaches a Major Milestone

When the sample of semen from the Duroc boar—a breed of domestic pig—arrived in Fort Collins, Colorado this spring, it went largely unnoticed. But the scientists and staff at the Agricultural Research Service's National Animal Germplasm Collection knew they had reached a milestone. The boar semen was the one millionth sample of animal germplasm to arrive at the facility, which began operating in 1999. "It was a pretty big moment for us," says geneticist Harvey Blackburn, who leads the ARS National Animal Germplasm Program, based in Fort Collins.

The ARS collection is the largest of its kind in the world and it's designed to ensure that there is enough genetic diversity available for breeders to meet the changing needs of the farmers and ranchers who provide much of our food supply. Only with such a diverse collection of genetic stock, available for breeding, can farmers and ranchers address the potential threats posed by emerging diseases, invasive pests, illnesses and fertility problems. Producers and breeders also need to be able to respond to changing consumer demands.

The collection is made up of samples of sperm, embryos, and tissues (e.g., ovaries and blood) of 167 breeds (36 species) of domesticated animals, such as cattle, pigs, chickens and sheep, along with farmed aquatic species, such as catfish, trout, salmon, and oysters. It also includes less common domesticated species like bison, elk, and even yaks.  The million samples have been sent to Fort Collins voluntarily over the years by approximately 3,500 animal breeders, universities and in some cases, private companies that market genetic resources for cattle, swine, poultry, and trout, Blackburn said. Most of the cattle semen samples come cryogenically preserved. Semen from pigs, rams, goats, and fish often arrives fresh and is packaged and cryopreserved at the laboratory.

Why build such a collection?  It's a valuable tool for exploring animal genomes and, when appropriate, it's used to reintroduce livestock and aquatic species into living populations, Blackburn said. It's also less expensive to store animal germplasm than to maintain live populations. The samples of semen and embryos, some of which predate the collection, have been stored in liquid nitrogen since the 1950s, at minus 300° F, a temperature cold enough to stop all biological processes, essentially putting them in "suspended animation," Blackburn added.

Research scientists say the collection is vital to their work."Our project would not have been possible without the collection," said Chad Dechow, an associate professor of dairy cattle genetics at Penn State University. He used the collection to produce Holstein offspring from 1950 era bulls with genetic variability no longer found in the living populations.

Holsteins are critical to the nation's dairy industry, but breeding for specific traits, such as milk production, that began in earnest in the 1950s have limited the breed's genetic diversity, which makes it difficult to address more recent problems, such as infertility. Breeding Holsteins with DNA from older lines, that were stored in the collection, should replenish the genetic diversity of Holsteins and give breeders better genetic tools to address modern day challenges, Dechow said.

“When we started artificially inseminating cattle in the 1950s and 60s, certain traits didn't appear to be valuable, but our selection goals will always change with time. The collection ensures that we have the genetic resources we need to meet those goals," he said.

Blackburn estimates that he and his colleagues have sent out about 6,000 samples to scientists, researchers and breeders in the past 10 years. Along with Dechow's Holstein project, scientists have used samples in a variety of efforts, including studying the meat quality in pigs and addressing a lethal genetic mutation that can cripple and kill Angus beef cattle.

There are 128 animal gene banks in the world, but the USDA collection is by far the largest, according to the United Nations' Food and Agriculture Organization. Collections kept by the Dutch and French are the next closest in size, with each of them having about half a million animal germplasm samples.

"It's a comprehensive resource and it provides a critical backup for the nation's food security," Blackburn added.