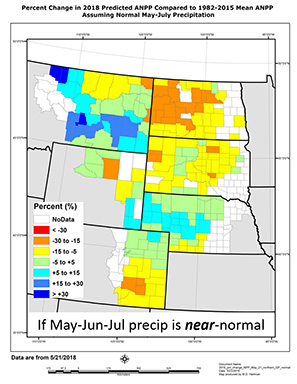 Grass-Cast, a new ARS rangeland grazing forecast system, can predict that if May, June and July precipitation is near normal in southeastern Colorado, the counties will be expected to have 5 to 15 percent fewer pounds per vegetation acre than their 34-year average. See the latest maps.

Every spring, ranchers face the same difficult challenge—trying to guess how much grass will be available for livestock to graze during the upcoming summer. Now an innovative new Grassland Productivity Forecast or “Grass-Cast” has published its first forecast to help producers in the Northern Great Plains reduce this economically important source of uncertainty.

This new experimental grassland forecast is the result of a collaboration between the Agricultural Research Service (ARS), a part of the U.S. Department of Agriculture (USDA); National Drought Mitigation Center (NDMC); Colorado State University and the University of Arizona.

Grass-Cast uses over 30 years of historical data about weather and vegetation growth—combined with seasonal precipitation forecasts—to predict if rangelands in individual counties are likely to produce above-normal, near-normal, or below-normal amounts of vegetation for grazing.

According to ARS economist Dannele Peck, Director of the USDA Northern Plains Climate Hub, Grass-Cast’s accuracy depends on how far into the future they try to look. The program’s accuracy improves as the growing season unfolds, so it should be consulted more than just once during the growing season.

The Grass-Cast forecasts are updated every two weeks to incorporate newly observed weather data and emerging trends in grazing conditions, such as changes caused by the flash drought in the western Dakotas and in eastern Montana in 2017.

Grass-Cast also provides ranchers with a view of rangeland productivity in the broader region to assist in larger-scale decision making and to determine where grazing resources might be more plentiful if their own region is at risk from drought.

Grass-Cast provides ranchers and land managers with an indication of what productivity is likely to be in the upcoming growing season relative to their own county’s more than 30-year history. Ranchers and land managers will need to combine the forecast information with their knowledge of local soils, plant communities, topography and other conditions as part of their decision-making process.

Since Grass-Cast cannot tell the difference between desirable forage species and undesirable forage species, it is important for producers to know what proportion of a pasture is occupied by weeds and how well those weeds respond to rain (or lack of rain) compared to the desirable species. Producers should monitor these different vegetation types to see if one is responding to the weather better than the other and adjust Grass-Cast’s productivity estimates accordingly.

The first Grass-Cast was released in May 2018. Watch for updates on the Grass-Cast website, on the USDA Northern Plains Climate Hub’s website, or on Twitter (@PeckAgEc).