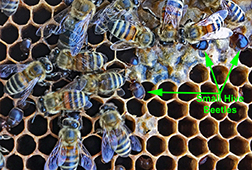 Having the small hive beetle’s genome may help scientists find better treatments to protect honey bees from this major problem.

BELTSVILLE, MARYLAND, December 19, 2018—Beekeepers and researchers will welcome the unveiling of the small hive beetle’s genome by Agricultural Research Service (ARS) scientists and their colleagues. The small hive beetle (SHB) is a major parasite problem of honey bees for which there are few effective treatments.

The SHB (Aethina tumida Murray) genome—a genome is the sum total of all an organism's DNA; a gene codes for a single protein to be built—is available at https://www.ncbi.nlm.nih.gov/genome/annotation_euk/Aethina_tumida/100 and was recently published in GigaScience.

This information will provide crucial keys that should lead to better, more targeted SHB control methods, including insecticidal treatments and possibly even genetic/breeding solutions.

The SHB has a strong gene-guided system that lets the beetle detoxify many insecticides. Having the genome will allow researchers to gain a more precise understanding of these detoxification genes, so more effective choices for control treatments can be made.

“The big challenge is identifying control methods that will target SHBs but not harm honey bees,” said geneticist Jay Evans, who ran the project and is also leader of the ARS Bee Research Laboratory. “One strategy is to look for insecticides that hit pathways in the genome where the SHB has few or no detoxification genes. It would be even better if an insecticide could be identified for which the honey bee has detoxification genes but that the SHB doesn’t.

A native of sub-Saharan Africa, the SHB has spread to many other locations, including North America, Europe, Australia, and the Philippines. It was first found in the United States in 1996 and during the summer of 1998, the SHB was blamed for losses of more than 20,000 honey bee colonies in Florida alone.

Today, the SHB has spread throughout the United States. It is a major problem especially for queen breeders and honey production. SHBs eat everything and anything in a bee colony: pollen, brood, honey, dead adult bees and combs) and cause honey to ferment in the process. If the number of SHBs is high enough, adult bees will abscond from the hive.

One avenue to which the SHB genome has already pointed is where to look for clues for how the SHB finds beehives; what pheromones or other smells do SHBs follow to target honey bee colonies.

Although there are about 350,000 beetle species and subspecies, only seven beetle genomes, including the SHB, have been completed and published.

Completing the SHB genome takes on even more importance when you realize that among the SHB’s close relatives are the destructive and invasive Asian longhorned beetle along with other sap beetles that are pests of sweet corn, tomatoes, strawberries and other fruit and vegetable crops.