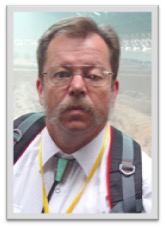 Scott Van Pelt is a GS-14 soil scientist interested in soil-atmosphere interactions. He has a background in soil and atmospheric physics and researches aeolian processes in agro-ecoscapes ranging from tilled production fields to native plant communities. In addition to direct measurements of horizontal and vertical sediment transport using passive and optically based sensors, Dr. Van Pelt also uses chemical tracers to follow the movement of particles from their source to their vector of transport or place of deposition. These chemical tracers include anthropogenic radioisotopes such as 137Cs and 239+240Pu released during atmospheric testing of nuclear weapons which allow decadal scale estimates of soil redistribution rates and rare earth elements from the lanthanide series for estimating soil redistribution rates on an hourly to monthly time scale. Dr. Van Pelt is actively involved in the current USDA-ARS effort to investigate and develop models of rangeland wind erosion. To support this effort, he is collaborating with investigators from the University of Pennsylvania and the Desert Research Institute under a $1 million NRI grant to study the use of legged robots as mobile instrument platforms during sandstorms. He is also collaborating with ARS, CSIRO, and university scientists at the Jornada Experimental Range near Las Cruces, NM and is part of an interdisciplinary team using NASA imagery to identify potential dust emission sites resulting from climate change and temporal droughts. He has hosted scientists on sabbatical from P.R. China and from Uzbekistan and is currently hosting a scientist from Igdir University in Turkey.