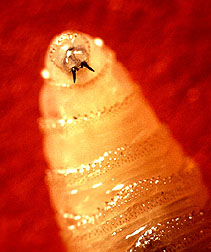 It's one of the greatest entomological success stories of all times and also one of the least well-known peaceful uses of atomic energy: perfection of an effective control for screwworm, Cochliomyia hominivorax (Coquerel), using x-radiation.

Obnoxious and destructive, the screwworm is the only insect known to consume the living flesh of warm-blooded animals. It has caused immeasurable suffering and losses in livestock, wildlife, and even human populations the world over.

In the 1930's ARS scientists Edward F. Knipling and Raymond C. Bushland turned their attention to alternative screwworm control measures. They concluded that reducing or eliminating the insect population would be a better solution than treating the pests topically after entry into hosts via skin wounds, as was then commonly done.

Though World War II's pressing entomological needs intervened, Knipling never gave up thinking about using genetic means to control screwworms. In 1946, he was named chief of the Insects Affecting Man and Animals Division of USDA's Bureau of Entomology and Plant Quarantine. Four years later, colleague Arthur W. Lindquist recommended to Knipling a book by Nobel laureate H. J. Muller titled "Drosophila," which discussed use of radiation to alter the genetic material of insects. Knipling immediately began a correspondence with Muller exploring the possible use of radiation to sterilize screwworms.

Convinced that the approach could work, Knipling reordered priorities to provide funding for Bushland to carry out tests at Kerrville, Texas. Bushland secured the cooperation of a nearby U.S. Army medical unit with suitable x-ray equipment. In just 6 months, it was handily demonstrated that 2,500 to 5,000 roentgens of x-rays would sterilize screwworm pupae without disrupting their adult mating behavior.

Knipling's theory was simple: Fertile females would mate with sterilized males mass-reared in insectaries and released into infested areas. With offspring resulting only from matings with native, unsterilized males, the screwworm population would gradually become insignificant and perhaps disappear.

But could it really work? First, a field test on Sanibel, the 20-square-mile Florida island, confirmed the theory. Though encouraged, scientists knew that a larger test was needed to verify those early findings. By chance, a routine request from a veterinarian from Curacao, Netherlands Antilles, alerted them to the screwworm's presence on the 170-square-mile island. The Dutch government was eager to assist in its elimination.

So a thousand sterile flies per square mile were released each week by airplane. After just three weeks--the length of one screwworm reproductive cycle--about 70 percent of new egg cases found were sterile. After the next 3 weeks of releases, sterility was 84 percent. And by the end of the third 3-week period, very few egg cases were to be found and all were sterile!

The speed with which screwworm eradication was achieved on Curacao demonstrated the great potential of this control method. Since then, strategic deployment of sterile flies has been used effectively in many locales--most recently, northern Africa--to protect vast areas from the horrific screwworm's predations.

Ever the visionary, Knipling believes that the sterile fly technique can be a successful management tool for many other insects of economic importance. "It's just a matter of working out a few more details," he says. He and Bushland were recently honored for their screwworm research by the United Nations' Food and Agriculture Organization in Rome, Italy.--By Linda R. Tokarz, ARS Information Staff.

[NOTE: The The sterile-insect approach eradicated the screwworm from the U.S. in 1966. Since 1991, Mexico and several countries in Central America have been declared free of screwworm: Belize, Guatemala, El Salvador, Honduras and Nicaragua.]

"Subduing the Screwworm" was published in the July 1992 issue of Agricultural Research magazine.