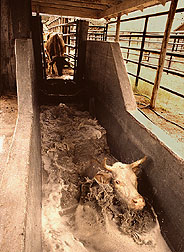 After a 36-year campaign, cattle fever ticks were finally declared eradicated from the United States in 1943.

When Thoebald Smith found that the way to control tick fever of cattle was to control the ticks, no one knew that his brilliant research would pave the way for control of malaria, yellow fever, and many other scourges of the Tropics. These developments came several years later and were the work of other men.

Around 1890 tick fever of cattle was causing widespread losses, especially in the South. Southern cattle were often driven to northern markets, and they usually left a trail of fever along the way. Northern cattle, taken to the South for breeding, usually contracted the disease and died.

Many southern cattlemen believed that ticks were somehow responsible for the disease, because cattle that died from it always had ticks on them. At first, there was no scientific evidence to support the belief, but the scientists eventually proved that the cattlemen were right.

Theobald Smith began work on tick fever in 1888. Later he was jointed by Dr. F.L. Kilborne and Dr. Cooper Curtice. Smith and Kilborne discovered the cause of the disease to be a protozoan parasite, found in the blood of infected animals. In the summer of 1890, they definitely established the fact that the disease was spread from animal to animal by the cattle tick.

That was the first demonstration that a disease-producing micro-organism can be transmitted by an insect carrier from one animal to another. (Working independently, as far as I can learn, Dr. M.B. Waite made the same fundamental discovery in relation to insect transmission of plant diseases.) The obvious cure for the disease was to get rid of cattle ticks, and this was done through a long-time eradication program conducted jointly by the Department and the states.

Getting rid of cattle ticks and tick fever has meant untold millions of dollars to cattle growers of the South; this research cost $65,999, for salaries and expenses, and the Department sets the value of the discovery at about 40 million dollars a year (editor's note: these are in 1940 dollar values). But you cannot fully measure its value: The implications of the research that paved the way for the discovery go far beyond the borders of our country and the monetary value of livestock.

Other researchers were quick to see the possibility for conquest of human diseases. In a few years the mosquito was recognized as the carrier of yellow fever, and the work of another Department scientist, Dr. L.O. Howard, furnished basic information for campaigns to eradicate mosquitoes. With this malady under control, it was possible for the United States to build the Panama Canal. French engineers had failed because they were unable to control yellow fever.

This story was excerpted from "Men Who Went Before", published in the Yearbook of Agriculture , 1943-47.