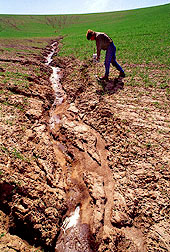 Severe soil erosion in a wheat field in Washington.

Farmland Studies for the Long Haul

The farmer and local soil conservationist were walking the field to plan a remedy. When they stopped, the conservationist held up a little workbook and said, "Here's a simple tool that'll pinpoint some practical solutions to your erosion problems. It's the Universal Soil Loss Equation—USLE for short."

The conservationist explained that after plugging in six factors, the USLE would predict the long-term yearly erosion rate for the field under specified cropping and management conditions. The planning goal was to reduce erosion to a level that permitted the field's productivity to be sustained indefinitely— in this case, 3 tons per acre annually.

"Nature itself largely controls three of the six equation factors," the conservationist said. "Those are rainfall energy and intensity, erodibility of the particular soil, and steepness of the slope. Length of slope can be partially modified. But every farmer fully controls two factors: cover crop and soil-management practices, and erosion-control practices."

Explanations over, the conservationist got to work determining soil type, percent of slope, and length of slope. Then he referred to tables in the workbook and punched a calculator.

"Your continuous potato rotation, planted up and down hill, loses almost 15 tons of soil per acre every year," he concluded. "Now let's check some alternatives."

In quick order, the conservationist applied USLE to gauging soil losses under several practices. He suggested growing a rotation of potatoes-oats-hay and installing contour strips. That alternative would hold soil losses well below tolerable levels. The farmer vetoed it, however, because it would reduce his income by cutting into his potato cash crop acreage.

The solution ultimately selected was to reduce the slope length by installing a diversion ditch 400 feet below the field's crest to control runoff. Next, the diversion would be combined with a potato-oats rotation grown across the slope. Then, by incorporating conservation tillage practices that hold soil disturbance to a minimum and leave most crop residues on the field, the farmer could keep soil losses under 2 tons per acre.

Although the conservationist applied USLE in minutes to save the potato grower's soil, the equation rests on over half a century of research in many States. Similar equations were put to use in the Corn Belt and the Northeast during the 1940's, but the USLE is the first to be applicable nationally. Its broad-based usefulness stems from the painstaking analysis of precipitation data from over 65,000 individual rainstorms and runoff and soil loss data from 49 field plots.

Major credit for developing USLE— which was released in 1960—belongs to ARS agricultural engineer Dwight L. Smith and research statistician Walter H. Wischmeir. In recent years the equation has been improved and refined by other ARS researchers, particularly soil scientist William C. Moldenhauer and hydrologic engineer George R. Foster. Today, USLE is a major weapon in combating the annual loss of 2 billion tons of soil that wash from the Nation's croplands.

Excerpted from "Milestones in ARS Research", published in the November 1983 issue of Agricultural Research magazine.