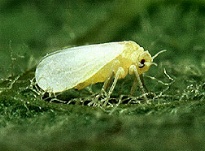 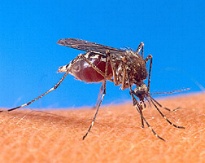 False "eyes"-twin white, football-shaped markings behind the head-show this to be an Asian multicolored lady beetle, Harmonia axyridis.

During the past 100 years, scientific approaches to insect pest control have run a gamut from the naively simple to the technologically complex. But the underlying spur to these diverse research efforts has been a single immutable fact: The successful production and storage of the world's agricultural crops—and the effective protection of humans and livestock against insect-carried diseases—depend upon the sustained control of hundreds of varied and adaptable insect pests.

So, even after a dynamic century of discovery and innovation, the earnest quest for safe, economical insect control methods still continues. Much has been accomplished...and yet, so much more remains to be done...if agriculturists are to have the means available to defend against the predations of these widespread and destructive pests.

The storm clouds of World War II had broken wide open over Europe, and the U.S. Army needed help with a big problem that came in a tiny package.

It is a sad fact of life that where there are people crowded into unsanitary conditions, there are likely to be body lice...and in the wake of those lice often comes typhus. Thus it was for the refugees of war in the Europe of the early 1940's.

Fortunately for the suffering Europeans, U.S. Department of Agriculture scientists had begun some special research in 1942 at Orlando, Florida, at the request of the U.S. Army, which was worried about the welfare of its troops as well as civilians.

Twenty-five men at Orlando bravely allowed themselves to be infested by some of the research station's colony of 75,000 lice in tests seeking an effective control against the vermin.

Those volunteers did not squirm in vain. Within 4 months, Formula MYL was developed, and soon millions of 2-ounce cans of the powder were on their way to American and Allied troops.

The human guinea pigs at Orlando weren't the only ones contributing to the effort. Edward F. Knipling, retired director of the Entomology Division of USDA's Agricultural Research Service, recalls how chemical companies sent in hundreds of samples of their wares to be checked for possible use against not only lice, but also mosquitoes, ticks, fleas, and bedbugs.

So it was that a packet of DDT arrived at the Orlando lab in early 1943 from the Geigy Co. in Switzerland.

"We put it in a test for body lice, and its lasting properties were at least twice those of the powder we'd developed," Knipling says. " It appeared to be quite safe, and in a matter of months we recommended its use by the military. Millions of men, women, and children were soon dusted for lice in the war theaters.

"Then we tested it for every other insect we were working on—house flies, mosquitoes, bedbugs. It gave fantastic results on practically everything.

"The phenomenal results with DDT stimulated industry in the United States, Great Britain, and probably other places to look for related types of chemicals," says Knipling. "By the late 1940's, there were several other encouraging insecticides available: benzene hexachloride, chlordane, toxaphene, aldrin, dieldrin, to name a few of the chlorinated hydrocarbons."

The modern age of agricultural chemicals had begun...to the detriment of many years of research on other alternatives.

For even before the 1940's, humans had not been entirely helpless against insects. By the time the term "biological control" was coined in 1919, scientists had already been pursuing the practice for several years.

Researchers still argue about how biological control should be defined, but one simple explanation is that it is the use of parasites, predators, and pathogens to combat unwanted invaders in crops—whether those invaders are insects, weeds, or even plant diseases.

An early hero of biological control was C.V. Riley, head of USDA's Division of Entomology upon its establishment in 1881. Prior to his USDA post—while still Missouri's state entomologist—Riley made the very first international shipment of an insect natural enemy when he sent specimens of a predaceous mite to France to control grape phylloxera there.

Riley was the guiding force behind one of the United States' earliest and most notable successes in biological control: importation in 1888-89 of the Vedalia beetle, Rodolia cardinalis, from Australia into California to battle the cottony-cushion scale, a pest threatening California's then-fledgling citrus industry.

The road to biological control looked wide and smooth in those early years. USDA explorations in Europe and Japan beginning in l905 turned up natural enemies of the gypsy moth and brown-tail moth.

From 1905 to 1918, USDA's Bureau of Entomology imported parasites and predators of the elm leaf beetle, alfalfa and clover leaf weevils, and sugarcane borer. In 1919, the department established a laboratory at Auch, France, to simplify the search for natural weapons; a second laboratory was established in Japan in 1922.

The events of World War II chilled biocontrol progress even further, according to Clarence H. Hoffman, who worked with Knipling and later served as director of ARS' Entomology Division.

"There was always recognition of biological control, but I think it wasn't widely pursued as much as insecticides because when pesticides came along, they were so potent and so cheap," says Hoffman, now retired.

"When DDT came in, everything exploded. Found to be effective against over 500 pests, it was recognized as a real miracle."

Says Hoffman, "DDT set off a whole series of investigations to get related compounds. The chemists had a field day."

"Chemical companies began putting a lot of emphasis on developing insecticides for agriculture and other purposes," adds Knipling.

"They came up with a class of insecticides called organophosphate compounds—malathion was one, and methyl parathion, and several others—that, from the standpoint of insect control, were even more effective than the chlorinated hydrocarbons that had looked so good."

In the post-World War II years and into the era of the Korean War, ARS continued cooperating with the chemical industry in evaluating pesticides, Knipling recalls.

"Most of the companies by then had their own screening programs and didn't just send us everything on their shelves," he says. "They'd only send us the promising ones to evaluate. But we did not do a whole lot of trying to develop new chemicals; industry did that."

Besides, Knipling adds, there was already trouble on the horizon.

"By the early 1950's, it was becoming quite clear that, useful as these insecticides were, there were a lot of problems with their extended use," he notes.

"Wildlife biologists were becoming concerned with effects on wildlife. Chemicals were upsetting nature's balance, killing the natural biocontrol agents along with the pests.

"People were finding residues in meat and milk by the early l950's, and while we were controlling some types of insects, the overall insect problem continued to be about the same, year after year. So there were good indications that insecticides alone wouldn't be the long-range solution."

Jack R. Coulson, now an entomologist in ARS' Insect Biocontrol Laboratory at Beltsville, Maryland, was still a college student in 1949-50, when he landed an unusual summer job: feeding DDT to quail and pheasants in experiments at the U.S. Fish and Wildlife Service's Patuxent Wildlife Research Center at Laurel, Maryland.

"Even then, scientists were concerned about its getting into the food of game birds and were studying the effects of that," Coulson recalls. "Scientists were also aware of what was happening with development of pesticide resistance among insects."

And even earlier, in 1947, Clarence Hoffman had worked on a research team in Pennsylvania testing the widespread effects of aerial applications of DDT against forest insects.

"We were looking at how much you could use and be safe, using from 1 to 5 pounds per acre." Hoffman says. "I tell you, those 5 pounds per acre were really destructive. We entomologists were the first to find that birds were very vulnerable to DDT."

Among those in the scientific community who saw the handwriting on the wall was ARS' Knipling. He recalls that he began making shifts in ARS' entomology research program to do more on biocontrol, host plant resistance, changes in cultural practices, and pest attractants.

"In 5 years, we'd shifted from 80 percent of our effort being on insecticides to probably not more than 50 percent," he says. "We were recommending to USDA and others that there should be more effort on biological control and other alternative methods, but our appropriations were not increased."

"I can remember when I was a graduate student at Cornell and he came by and spoke to us," says Soper. "Dr. Knipling changed policy, going from the treadmill-like screening of insecticides and pesticides to looking at a different approach."

In 1962, Knipling's campaign got a healthy boost from the publication of the book "Silent Spring," written by Rachel Carson, that sounded a widespread warning about the environmental drawbacks of chemical use.

"'Silent Spring' got me involved in biocontrol," notes Soper. "I was writing a graduate thesis on woodboring beetles, and the best control I found was a fungal pathogen. When 'Silent Spring' came out, everyone was concerned."

"Her book probably did more than anything else to gain public attention and convince the budget people that these pesticides had caused problems and we needed to look more at biological controls," adds Knipling.

But if those who held the purse strings needed convincing, many scientists did not. "Ed Knipling was already well on his way to developing nonchemical control methods when 'Silent Spring' came out," Hoffman says.

USDA research on biological control and other alternatives to chemical insecticides boomed in the 1960's. New labs sprang up in Columbia, Missouri; Gainesville, Florida; and Fargo, North Dakota. Plant breeders concentrated more effort on developing plants with the natural ability to resist or tolerate pest attacks.

"It was almost a complete shift—80 percent of our effort was on alternatives to chemicals to control insects," says Knipling.

The successes were impressive, and led to significant savings for farmers. In 1986, it was calculated that biocontrols against the alfalfa weevil netted savings of about $48 million annually; a later report put the benefit even higher, at $88 million in 1987 dollars. And the price tag for the research was a mere $1 million—for a ratio of return on investment of about 50 to 1. Savings from biocontrol of another pest, the pea aphid, were calculated in 1984 at about $36 million annually—on alfalfa alone.

In a book he is currently editing on the first century of USDA's biological control research, Coulson writes that since 1953, USDA's classical biocontrol program has saved growers several hundreds of millions of dollars annually, largely as a result of reduced cost of pesticide applications. This would put total grower savings from biocontrol during the past two decades at about $2 billion or more.

"We get a new major pest in this country about every 3 years," he says. "Biocontrol alone will have a hard time keeping up."

In fact, one of the chief criticisms of biological control is that it moves too slowly—and does too little. Even its strongest supporters acknowledge that natural biological agents will not adequately control every insect and that they take time to work.

"Our goal isn't 100-percent control or at least, it shouldn't be," notes Soper. "The goal is to produce a crop economically. You only have to bring the pest population levels below the economic threshold—that point at which the farmer starts to lose money because of the pest."

Farmers in the future should go one step further, says Knipling, to a concept he calls "total population management." This entails widespread, coordinated attacks on populations of the major pests at the precise time when such attacks will damage them most.

But even that won't allow a total farewell to chemicals, Knipling warns.

"We'll always need insecticides," he says. "In the United States alone, there are probably 1,000 different insects a year that cause a little bit of damage somewhere.

"But probably 100 of those insects cause damage year after year across a much wider area. It's those we should plan to control in an ecologically sound manner before they become an even bigger problem."—By Sandy Miller Hays, ARS.