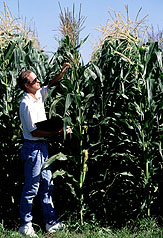 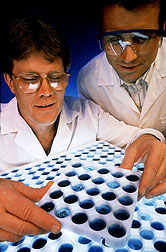 About 95 percent of our corn acreage now is planted to hybrid corn. We produce at least 20 percent more corn on 25 percent fewer acres than in 1930, when seed of hybrid corn became available in quantity to American farmers. From the time of the first settlers, who obtained corn from the Indians, farmers selected seed ears from the standing stalk or from the crib. They entered the best ears of these open-pollinated varieties in fairs and shows, and people thought the prizewinners would pass on their superiority to their progeny and so improve yields. It did not turn out that way.

G.H. Shull, a geneticist at Cold Spring, Harbor, N.Y., started experiments in 1906 on inheritance in corn. From them came important observations on the reduction in vigor on inbreeding and the restoration of vigor on crossing. They provided the basis for hybrid corn. Studies of inbreeding were made at other experiment stations. The general opinion was that hybrid corn was not feasible because of the poor vigor of the inbred parents.

Open-pollinated varieties are maintained by mass selection. Windborne pollen effects fertilization, and there is no control of the male parentage. Inbred lines are developed by a combination of inbreeding and selection. Inbreeding involves the transfer of pollen from an individual plant to the silks of the same plant. This process is repeated for several generations until the strain becomes stable, or true breeding. Selection is practiced in each generation to maintain only the superior types. Cross-breeding involves the crossing of selected parents. Single crosses are produced by crossing two inbred lines. Double crosses are produced by crossing two different single crosses.

D.F. Jones, who was in charge of research on corn at the Connecticut Agricultural Experiment Station, suggested in 1918 the double-cross hybrids involving four inbred parents, which partly removed the limitation imposed by poor vigor of the inbred parents. The use of this system of crossing male hybrid corn commercially feasible. The first commercial double-cross hybrid, Burr-Leaming, was released and recommended by the Connecticut station in 1921.

Many of the State and Federal inbreeding and hybridization programs were started in the early twenties. Basic genetic theory was inadequate to serve as a guide. New procedures were required. Many persons contributed to this phase of the development. Hundreds of inbred lines were isolated, and these were evaluated in thousands of crosses.

When the best of them became commercially available, some farmers were reluctant to adopt them, but demonstration plantings and field observations proved the worth of the hybrids. The demand for hybrid seed in 1935 in the Corn Belt exceeded production, and the hybrid seed industry developed rapidly.

The production of hybrid seed requires careful control of the parents. During the experimental phases of developing inbred lines and hybrids, this control is accomplished by covering the ear shoots and tassels with bags and transferring pollen of the desired type by hand. In commercial seed production, control is achieved by the isolation of the seed fields and by the removal of tassels, before shedding of the pollen begins, from the rows to be used as female parents. Detasseling originally was done by crews walking through the field pulling tassels before the pollen was shed. Machines were developed later to carry the workers through the seed fields.

Still later, cytoplasmic-sterile stocks and fertility-restoration genes were discovered and incorporated into the more widely used inbred parents. Stocks carrying cytoplasmic sterility shed no pollen. Cytoplasmic sterility is transmitted only through the female parent and results in the absence of fertile pollen. In effect, the strain is male sterile. Fertilization restoration is controlled by genes having the ability to restore male fertility to otherwise cytoplasmic male-sterile lines. The proper manipulation of these two traits completely avoids the necessity for detasseling but assures full fertility in the farmer’s field.

Besides an increase in production, other benefits have been achieved by the use of hybrid seed. Hybrids make more efficient use of applied fertilizer. Progress has been made in developing hybrids resistant to some insects and diseases; the result is a product of higher quality and a more stable yearly production. Because of their greater uniformity in maturity and resistance to lodging, the hybrids have helped make large-scale mechanization possible.

This story appeared as "Hybrid Corn", published in the Yearbook of Agriculture, 1962.