Watch a video to learn about this and other discoveries that improve our daily lives. 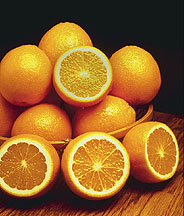 "More And Better Citrus" was published in Science in Your Shopping Cart.

In Florida, we've come up with citrus varieties that are higher yielding with increased disease resistance, better color, and longer shelf life. A major success story is Ambersweet, a cold-hardy citrus that's been approved for use in orange juice products. Because it withstands Florida's occasional cold snaps that can ruin most citrus, Ambersweet is being widely planted in the Sunshine State. It took 20 years of patient breeding to develop it, but the payoff is huge.

If there's usually a grapefruit in your shopping cart, you may already have met up with a favorite ARS-created variety. It's a red-fleshed, thin-skinned, seedless grapefruit that was developed and released in 1987. Since then, over 4 million Flame nursery trees have been propagated in Florida. No other grapefruit variety has ever been so widely accepted and planted.

Keeping oranges fresh is another citrus-oriented task we've taken on. Oranges that have been covered with our specially designed coating will stay fresh for up to 3 weeks at room temperature. In that time, fruit treated with the usual grocer's coatings will look shrunken and discolored.

Turning On The Juice

Fifty years ago, frozen orange juice was just a flavorless commercial flop. The only orange juice you could get back then was either squeezed from fresh oranges, mixed from a relatively tasteless concentrate, or poured from a can-and it tasted like can!

All this at a time when lots of good Florida oranges were going to waste.

Then, in 1946, Louis G. MacDowell, director of research for the Florida Citrus Commission, had an idea. He suggested that adding a little single-strength fresh juice, or "cut-back," to slightly overconcentrated orange juice might restore the flavor and aroma lost during vacuum evaporation.

He took the idea to USDA researchers, the folks with the equipment and expertise to help develop the idea. Not only did it work but the vastly improved concentrate could be easily frozen. And so began the success story that's now such a familiar sight on the breakfast table-frozen concentrated orange juice.

"More And Better Citrus" was published in Science in Your Shopping Cart.