Imagine having a forecast ahead of wildfire season telling you which places are most likely to suffer a large rangeland fire—the kind of fire that can ravage thousands of acres if not quickly contained.

That forecast is just what a team of ARS, University of Montana and NRCS scientists have created for the Great Basin, a vast area that spans most of Nevada and parts of Utah, Oregon, California, Wyoming and Idaho.

The researchers have created a model that combines measurements of accumulated annual and perennial grasses--potential fuel for rangeland wildfires--with weather and climate data. That information is then translated into maps showing the likelihood of a large wildfire—one that could burn more than 1,000 acres—across the Great Basin. The forecasts can also be scaled down to predict fire risk for areas as small as a single pasture. 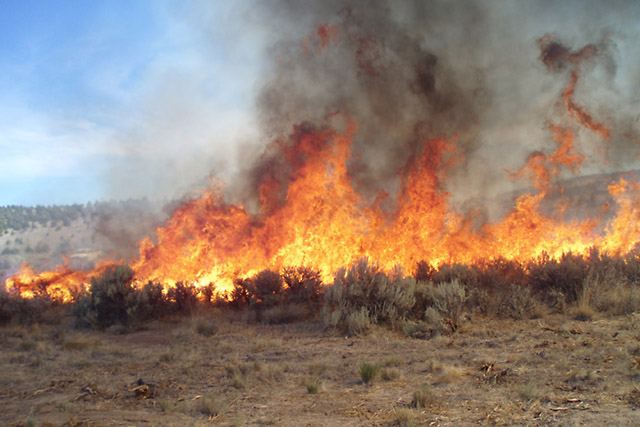 The probability of wildfires striking locations in Great Basin rangelands can now be forecast with a new model developed by ARS scientists and their collaborators. (Photo by Chad Boyd)

"The accuracy of our forecasts depends mostly on our ability to quantify the buildup of grassy fuels from the previous year," explained rangeland scientist Chad S. Boyd of the ARS Range and Meadow Forage Management Research Unit in Burns, Oregon; Boyd is a co-leader of the research team.

The team posts the rangeland fire probability maps for the coming fire season, roughly June through September, on the Rangeland Analysis Platform website in the spring.

Using these forecast maps, land managers and others could preemptively reduce available fuel in the highest-risk areas. The maps could help them prioritize where it makes the most sense to invest in managing fuel levels, which can be modified, unlike weather and topography, the other major rangeland fire influences, which can't really be changed. "Forecast maps can be used alongside other planning tools to decide where to focus limited resources before the fire season begins," Boyd explained

This emphasis on the previous year's fuel as a likely cause of range fires contrasts with forest fires, because forests generally have enough vegetative fuels to burn every year and only need an ignition event, such as a lightning strike, for a fire to burst into flames.

"But with rangeland wildfires, whether there is enough fuel to feed a large-scale fire really varies from place to place and year to year across the Great Basin," Boyd added. 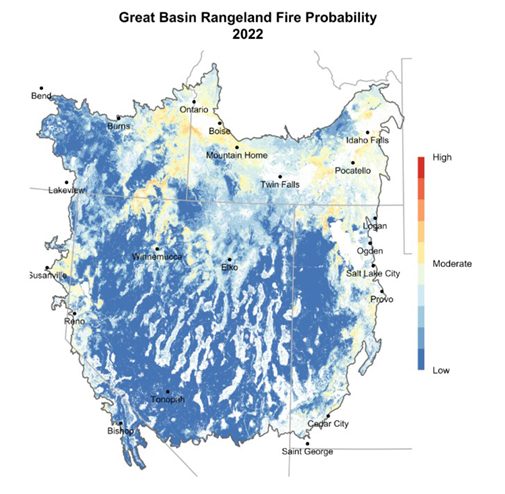 Joe T. Smith, a research scientist and model designer with the University of Montana, co-leads the effort. He was surprised when he learned that the accumulation of herbaceous plants from the previous growing season was the best predictor of large range fires. "This gives new emphasis to fighting the spread of fast-growing invasive annual grasses like cheatgrass in the Great Basin," he said.  — By Kim Kaplan, ARS Office of Communications