For millennia, humans have tried everything from prayer to dancing to summon rain from the skies. More recently, we have leveraged the power of technology, sending flares burning silver iodide into the clouds, with some success. Today, as water grows ever more scarce, researchers at ARS are developing a revolutionary technique of seeding clouds to produce more rain, in cleaner, less costly ways.

Martin explained that for water droplets in a cloud to make rain, they must collide and coalesce to form drops that are large enough to fall to the ground. He and his colleagues have been nudging this process along by releasing charged water particles into clouds. The particles, which have the opposite electrical charge of the water in the clouds, act as cloud condensation nuclei and kickstart the natural rainmaking process. Water molecules in the clouds are attracted to the charged droplets, and collide and coalesce with them until they form drops that are large enough to precipitate out of the cloud as rain.

The researchers get the particles into clouds using electrostatic nozzles mounted on an agricultural aircraft. The nozzles charge the particles as they are sprayed, the charged droplets are carried up into the clouds and distributed by updrafts that feed the clouds, and the entire process takes only 15-20 minutes from seeding to precipitation. 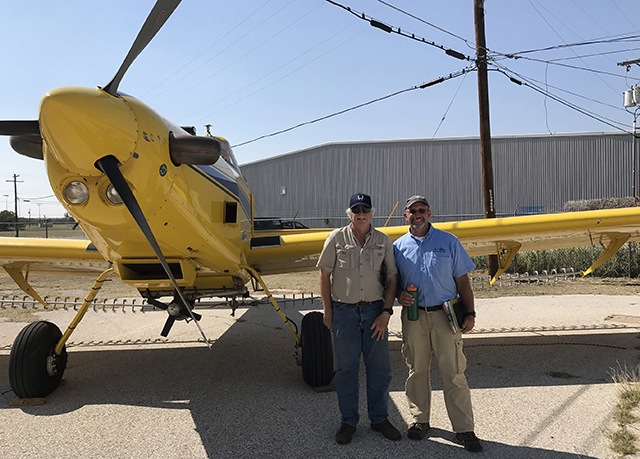 ARS research engineer Daniel Martin (right) stands with a pilot next to one of the agricultural aircraft used to spray the charged droplets. (Photo courtesy of Daniel Martin, D4964-1)

Martin and his team first began testing the technology in 2017, knowing that charged water droplets worked wonders in other settings: his earlier research focused on how using electrostatic spray application technology to spray plants with pesticides helped the substances cover the plants more fully, rendering the pesticide more effective. However, the cost of research on aerial applications of the technology has been a challenge. Martin explained, "It's very expensive to fly these types of aircraft, at 8,000-10,000 feet, burning a gallon of fuel a minute."

That's where he and his team received a powerful helping hand: after their initial successful trials, they applied for funding through ARSX2021, a competition that incentivizes researchers to propose innovative, high-risk ideas that cross disciplines and break boundaries to solve our most pressing challenges. As one of three winning teams in that competition, Martin's team received $100,000 to conduct their proposed research, expanding their tests to more clouds to collect a larger set of data.

"Eighty percent of that budget went directly into flight operations," Martin said, noting that the funding was important because there's less investment in weather modification programs here in the U.S. than elsewhere.

"In other countries, they highly prioritize cloud seeding and rain enhancement. Indonesia, Thailand, India…China has a huge weather modification program, employing an estimated 35,000 people. In the U.S., there's only a couple hundred people," he explained, adding that "each state is responsible for their own program. In these other countries, it's nationally-run." 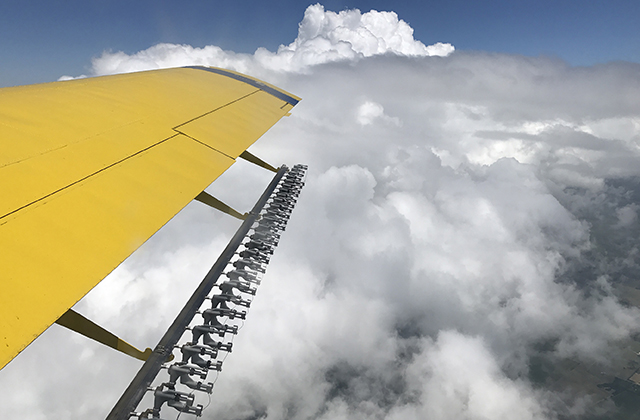 That's important, he says because, "It takes a long-term commitment for these programs to work successfully. You can't wait until a drought because if there are no clouds, there's nothing we can do. The clouds are the moisture reservoir; that's where the water is. What we need to do is take advantage of the times when we do have clouds to try to get an extra 10, 15, 20% of rainfall so that when we go through droughts, the lakes are built up, the rivers are at good levels, the aquifers are re-charged."

Martin called the program a good investment, pointing out that as water becomes more scarce, the value of that water is going to increase.

"If you take an acre of land and fill it a foot deep with water, the cost of producing that amount of water with cloud seeding is less than $10. If you compare that to desalination, the cost is 20X that amount."

In addition, Martin and his team believe the technology has other applications that may be quite valuable – and they have applied for additional funding to explore those cases.

"Hail causes over a billion dollars of damage to agricultural crops each year," Martin said. "If we can save those crops that are in the field that we are using precious arable land to plant, we are using fertilizer to grow, we have to spray pesticides to protect from weeds and insects and disease, we have to use water to irrigate, that's where the reward would be, for that technology.

The team is also looking into applications to mitigate pollution and improve air quality by removing smog and particulates, and to dissipate fog at airports. For all the applications, Martin points out, it would be fairly easy to implement the technology.

"The infrastructure's already there, because agricultural aircraft work best with this technology, and there are aerial applicators across the nation that already have the skills and the equipment to implement this technology, next week. All we have to do is train them to seed clouds, and this could be scaled around the world." — By Kathryn Markham, ARS Office of Communications