How ARSX Scientists are Turning Pests into Poultry Feed

Mosquitoes that feast on human blood can be a nuisance and, in some cases, a serious danger. Now, a team of enterprising ARS scientists is proposing to turn the tables on them and other insect irritants like house flies, making them into lunch for the animals that we eat. Their project is one of three winning ideas in ARSX2021, a competition that incentivizes researchers to propose innovative, high-risk ideas that cross disciplines and break boundaries to solve our most pressing challenges. The 2021 theme, "Harvest for a Healthier Future," focused on "transformative ideas that will help achieve a resilient and healthy food system."

The idea of farming insects as an animal food source was already the subject of one of the ARS Grand Challenge-Synergies, initiatives that "seek to unlock greater impact…by encouraging and facilitating synergistic interactions between scientists across locations, National Programs, and research systems." The ARSX project added a new dimension, by specifically proposing the use of nuisance insects like mosquitoes, which are abundant in agricultural settings, as the insect food source – not so much killing two birds with one stone as feeding many birds with one pest.

The team, composed of Drs. Alex Chaskopoulou, Lee Cohnstaedt, Kiki Zinoviadou, Annie Donoghue, Brenda Oppert and Komala Arsi, had never worked together as a group before, but the competition united them through their complementary areas of expertise, building camaraderie that benefitted the project.

They have already made great strides, testing and refining several types of insect traps, and examining the captured insects to ensure they won't transmit pathogens up the food chain when they're eaten. When the design is finalized, the traps could be used by individual farmers to feed their own animals, or by larger commercial operations that could be net exporters of insect-based feed.

The insects seem likely to be a hit — with both animals and humans. In fact, as Chaskopoulou notes, chickens seem to vastly prefer mosquitoes to their current feed: "The moment that [the chickens got the mosquitoes], you could see in the farmers' faces, they were in awe, like: 'oh my goodness, how is this possible?' Because the chicks weren't just eating the mosquitoes, they were rushing to feed on the mosquitoes. [Mosquitoes are] up to 63% protein, and we are competing with [feed made from] soybean, which is in the range of 40% protein. [Insects are] part of their natural diet, so biologically [the chickens] know what's good for them."

Adds Cohnstaedt: "There's a lot of anecdotal evidence that if chickens have access to insects, their yolks are yellower, the eggs taste different. I think lots of people who have backyard chickens will attest that if you give chickens higher-quality proteins, minerals and [heart-healthy] omega-3 fatty acids, everything looks better, and it tastes better." 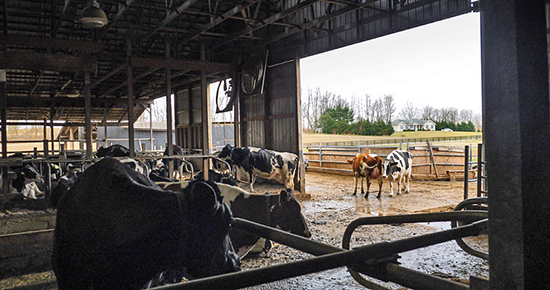 And that's not all. Zinoviadou, who specializes in food science, notes that, "Insects in general have a very high content of chitin, a polysaccharide that can have anti-microbial activity…anecdotal evidence [showed] that when quails were fed with mosquitoes, the fatality rate of newly-hatched birds went down almost to zero."

Of course, all these benefits will only accrue if farmers choose to adopt the insect-trapping and feeding practices the team is refining – a decision that comes down to cost. The team is acutely aware of that fact, and is working hard to make their solution practical and accessible. Their goal: to include in their insect traps only parts that can be found at a hardware store or junkyard.

If they succeed, the benefits will be manifold; Cohnstaedt lists them off: "less pesticide use; more protein; higher-quality animals; and an easier, more cyclical, lower-waste environment that reduces CO2 and other environmental contaminants." Indeed, because the insects are trapped without pesticides, the energy normally used to spray and distribute pesticides doesn't contribute to CO2 emissions. The trapped insects, in turn, are a superior nutrient for both birds and, ultimately, humans; and waste decreases because the insects are turned from a pest into a resource — a virtuous cycle all around.

And the wins don't stop there: if the project succeeds, it will also further validate the ARSX model, driving innovation forward far more quickly than traditional research that doesn't feature the same kind of collaboration. For the team, that proof has already materialized. Says Donoghue: "I see ARSX, our project, as a jumping block for the next 5 years of research. We're talking about a lot more expansion and new grants that are coming out of it and ideas for us to look at these things a lot more." — By Kathryn Markham, ARS Office of Communications