Getting to the Root of the Matter

From Alice in Wonderland to The Lord of the Rings, our stories have long depicted magical worlds hidden underground. Yet the most magical account of all might turn out to be reality, as scientists reveal a complex network of reactions between plants, fungi, bacteria, and more, interacting below the soil surface to support the foundations of life. At ARS, one part of the research into this intricate underground world involves identifying techniques that will keep nitrogen — a vital element for plant growth — in the soil.

Like all good stories, this one has heroes and villains whose actions can wreak havoc or save us. When properly sequestered underground, some forms of nitrogen like ammonium (NH4) and nitrate (NO3) perform heroic feats, fertilizing the plants that we depend on for our food. Yet when they escape the soil in the wrong ways, they morph into closely-related super-villains — malignant forms of nitrogen like nitrous oxide (N2O) that, in the atmosphere, is 300 times more powerful than carbon dioxide in trapping heat, and lingers far longer. In fact, N2O is the largest source of greenhouse gas from agriculture. Escaped nitrogen can also get into groundwater or run off fields and into waterways; once there, it can fuel algae blooms in coastal waters that consume oxygen, harming fish and other aquatic creatures.

To keep nitrogen where it can do us the most good, a team of ARS scientists is developing new techniques for cover crop breeders. Their goal: to help the breeders identify plants whose extended underground root systems (known as the rhizosphere) are most effective at keeping nitrogen in the soil. The root systems, which include microbes that interact with the plants, secure nitrogen via a process called biological nitrification inhibition (BNI). Nitrification is a process in which nitrogen is transformed from one form, ammonium, to other forms, like nitrate. When the plants' root systems inhibit that process, the nitrogen remains safely within the soil, benefiting plants — and those who eat them. 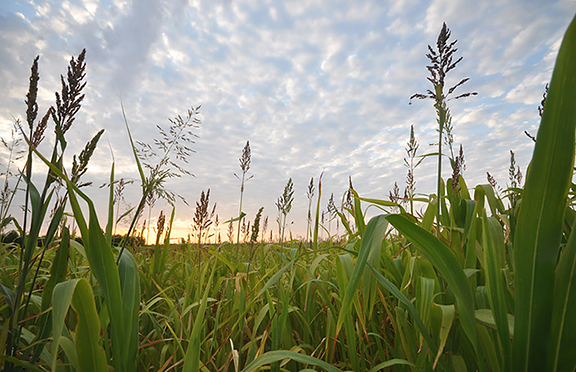 Cover crops, like those seen here in a field near Rogers, Texas, provide soil microbes with food and shelter from temperature extremes. (Photo by Ron Nichols, NRCS).

The project is one of three winning entries in ARSX2021, a competition designed to promote collaboration between scientists with diverse areas of expertise, working on high-stakes, high-reward ideas that produce breakthrough innovation.

"The research on BNI has been around for several decades," said project leader Dr. Bryan Emmett, "but it's been focused on tropical warm-season grasses, and as that body of research has developed, they've realized that there are many different grasses that have some sort of BNI activity, and huge variation within a species. So, it's a question of looking for the [BNI] trait in plants that fit in our cropping systems."

Together with his collaborators, Drs. Florence Sessoms, Ryan Hayes, Rod Venterea, and Claire Phillips, Emmett is testing germplasm from USDA's store of seeds from all over the globe to find those with the invaluable BNI trait. If the team succeeds, they could transform existing cover crops, making them vastly more beneficial. The cover crops now in use perform many valuable services, but they don't inhibit nitrification — yet.

Emmett explained that "if we can develop [BNI] in a plant that's not a cash crop, we have a lot of flexibility for how we fit it into our cropping systems."

That effort seems to be working, at least initially. Preliminary results from a ryegrass that Sessoms has grown and assessed have shown good BNI capacity. The team is now close to starting initial screening of a second plant, cereal rye. Finding the trait, though, is only the first step. For BNI plants to be available to farmers, plant breeders need to be able to identify and select for the trait on a much larger scale. 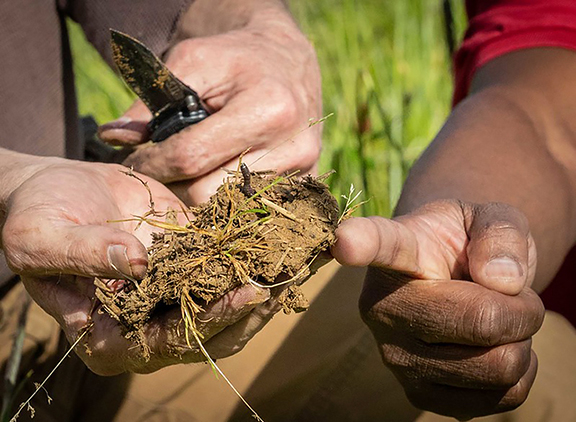 "There are a lot of processing steps…before you can [test the plants for BNI capacity], and the organisms [of the rhizosphere] are difficult to work with," explained Emmett. "It would be really challenging for breeders to be able to say, we're going to keep cultures of these organisms and we're going to run these tests at a scale that we need."

Instead, lab-based scientists can do that work, refining their techniques to make assessing BNI capacity simpler. Ultimately, Emmett said, their question is, "how do we make that system easier to use for the non-microbiologist?"

"If there is a network of breeders using our methods, searching for this trait and incorporating it into plants that farmers can use — that's the dream," he said. "We put a lot of thought into what varieties of crop plants we put out. We could gain equal benefit from looking at the varieties of cover crops that we plant on the landscape."

Those benefits may even extend more broadly, beyond agriculture alone. Sessoms, a turfgrass specialist, described the wider implications:

"We could create cultivars that have high BNI capacity that could be used by seed companies to be sold to the general public and other turfgrass stakeholders — for parks, sports field managers, and golf courses," she pointed out. "It's very different from cover crops, but it has a huge economic and environmental impact, too."

While the early chapters are still being written, the story of BNI in our soils seems poised for exciting developments. — By Kathryn Markham, ARS Office of Communications