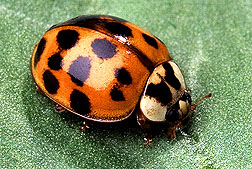 Multicolored Asian lady beetle (Harmonia axyridis)—This insect has a wider range of colors and spot numbers than other lady beetle species. Wings range from black to mustard; spots number zero to many. The most common U.S. form is mustard to red with 16 or more black spots.

The multicolored Asian lady beetle (Harmonia axyridis) is native to Asia but occurs in many areas of the United States. This beneficial insect was imported and released as early as 1916 in attempts to naturally control certain insect pests. But the first populations were not found in this country until 1988 in Louisiana near the busy port of New Orleans.

Over the years, federal, state and private entomologists released the insect at a number of locations. But it was not detected in these places until some years after it had become established in Louisiana. In addition, accidental entries have occurred via imported nursery items at ports in Delaware and South Carolina. Thus, it is uncertain whether the beetle's establishment resulted from planned releases, accidental entries or both.

Lady beetles have four distinct life stages: egg, larva, pupa and adult. The multicolored Asian lady beetle adults begin laying eggs on host plants in early spring. Eggs hatch in about three to five days, and larvae begin searching on plants for aphids and other soft-bodied arthropods on which to feed. Adults and larvae typically feed upon the same prey. Larvae molt four times, becoming larger after each molt, and enter an immobile pupal stage after the last molt.

After several days, the adult beetle emerges from the pupal case. Development time from egg to adult requires about 15-25 days depending on temperature and food availability. Later in the fall, near the time of killing frosts, the adult beetles seek shelter to spend the winter.

This variably colored and spotted lady beetle is an effective, natural control for harmful plant pests such as aphids, scale and other soft-bodied arthropods. Still, its tendency to overwinter in homes and other buildings, sometimes in large numbers, may make them a nuisance to many persons.

If agitated or squashed, the beetles may exhibit a defensive reaction known as “reflex bleeding,” in which a yellow fluid with an unpleasant odor is released from leg joints. This reaction generally prevents predators, such a birds, from eating lady beetles. But in the home, the fluid may stain walls and fabrics.

Multicolored Asian lady beetles are beneficial insects. Their natural control of aphids in pecan orchards has decreased insecticide use against those pests. Additionally, they have controlled aphids on some ornamental plants. Still, these lady beetles are unwelcome guests for many homeowners.

What These Insects Do—And Don't Do

Lady beetles are not structure-damaging pests, unlike insects such as termites and carpenter ants. Lady beetles do not chew or bore holes in walls or eat carpet or furniture. They do not lay their eggs in homes.

Once the lady beetles enter the walls of a building through cracks and crevices, they may or may not proceed to the interior of the building. Most stay in the wall spaces.

During warm days of late winter and early spring, overwintering beetles in a wall space may become active. In their search for an exit, they may enter the home's living areas and become a nuisance. Warmer temperatures or lighting in the living areas may attract these active beetles as they search for an exit.

Preventing the lady beetles from entering is the best approach to keeping them from becoming a household nuisance in fall and winter. Caulking exterior cracks and crevices--before the lady beetles seek overwintering sites-- is the best way to keep them out. This will also keep out other unwanted insects such as wasps, and will save homeowners money on energy costs.

Lady beetles that enter wall spaces in the fall may remain there, without entering living areas, until they depart in spring to search for food. But some may become active on warm days in late winter or early spring and move into living areas.

Sweeping and vacuuming are effective methods for removing these lady beetles from living areas. Using insecticides indoors for control of the lady beetles is not typically recommended unless the infestation is very heavy, and professional pest control advice should be sought.

Lady beetles that enter living areas are typically attracted to light. A trap for indoor use that uses light to attract lady beetles and other flying insects was developed by entomologist Louis Tedders (retired) and colleagues at the Southeastern Fruit and Tree Nut Research Laboratory, Agricultural Research Service, Byron, Ga. The insects become trapped in a removable bag. Use of insecticide is unnecessary. A patent application was filed, but a patent was not granted.

Detailed technical instructions and diagrams for constructing the trap are available on an ARS web site in PDF (portable document format) at: